The Oxford Edition of Blackstone's: Commentaries on the Laws of England: Book III: Of Private Wrongs (Paperback) 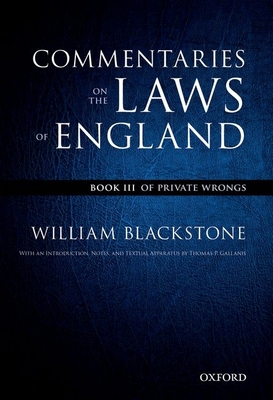 Oxford's variorum edition of William Blackstone's seminal treatise on the common law of England and Wales offers the definitive account of the Commentaries' development in a modern format. For the first time it is possible to trace the evolution of English law and Blackstone's thought through
the eight editions of Blackstone's lifetime, and the authorial corrections of the posthumous ninth edition. Introductions by the general editor and the volume editors set the Commentaries in their historical context, examining Blackstone's distinctive view of the common law, and editorial notes
throughout the four volumes assist the modern reader in understanding this key text in the Anglo-American common law tradition. Entitled Of Private Wrongs, Book III can be divided into three principal parts. The first describes the multiple courts in England and their jurisdictions, including the wrongs cognizable in each of them. The second describes some aspects of the substantive common law: wrongs to persons and to
personal and real property. The third describes the processes of litigation in the courts of common law and equity.

William Blackstone Professor Thomas P. Gallanis is a prize-winning legal historian and comparative lawyer and an expert on trust, succession, property, and fiduciary law and the history of the common law. He was awarded the Selden Society's David Yale Prize for his scholarly article on the history of evidence law, which was judged 'a distinguished contribution to the history of the laws and legal institutions of England and Wales'. He has been a visiting fellow of All Souls College (Oxford) and Magdalene College (Cambridge), the Herbert Smith Visitor in the law faculty of Cambridge University, and a Mellonfellow at the Institute for Advanced Study (Princeton).