The Oxford Edition of Blackstone's: Commentaries on the Laws of England: Book I, II, III, and IV Pack (Hardcover) 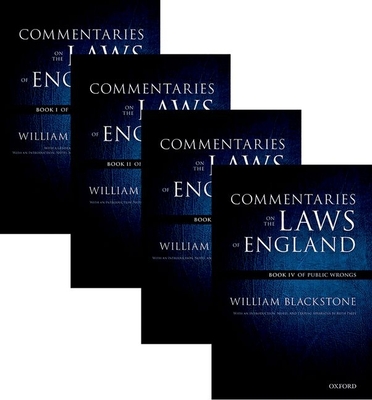 Oxford's variorum edition of William Blackstone's seminal treatise on the common law of England and Wales offers the definitive account of the Commentaries' development in a modern format. For the first time it is possible to trace the evolution of English law and Blackstone's thought through
the eight editions of Blackstone's lifetime, and the authorial corrections of the posthumous ninth edition. Introductions by the general editor and the volume editors set the Commentaries in their historical context, examining Blackstone's distinctive view of the common law, and editorial notes
throughout the four volumes assist the modern reader in understanding this key text in the Anglo-American common law tradition. In the final volume of the Commentaries Blackstone presents a comprehensive and critical overview of English criminal law and procedure, prefaced by a discussion of the philosophical and basis of the criminal justice system. His final chapter 'On the Rise, Progress, and Gradual Improvements, of the
Laws of England' provides a fitting historical conclusion to the work as a whole.

William Blackstone Ruth Paley is an Editor at the History of Parliament Trust, focusing on the House of Lords from 1660-1832.