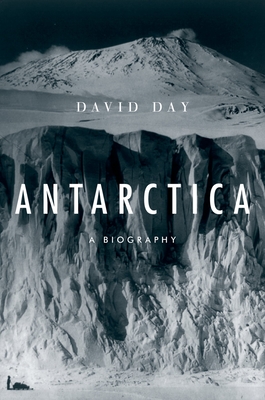 Since the first sailing ships spied the Antarctic coastline in 1820, the frozen continent has captured the world's imagination. David Day's brilliant biography of Antarctica describes in fascinating detail every aspect of this vast land's history--two centuries of exploration, scientific investigation, and contentious geopolitics. Drawing from archives from around the world, Day provides a sweeping, large-scale history of Antarctica. Focusing on the dynamic personalities drawn to this unconquered land, the book offers an engaging collective biography of explorers and scientists battling the elements in the most hostile place on earth. We see intrepid sea captains picking their way past icebergs and pushing to the edge of the shifting pack ice, sanguinary sealers and whalers drawn south to exploit the Penguin El Dorado, famed nineteenth-century explorers like Scott and Amundson in their highly publicized race to the South Pole, and aviators like Clarence Ellsworth and Richard Byrd, flying over great stretches of undiscovered land. Yet Antarctica is also the story of nations seeking to incorporate the Antarctic into their national narratives and to claim its frozen wastes as their own. As Day shows, in a place as remote as Antarctica, claiming land was not just about seeing a place for the first time, or raising a flag over it; it was about mapping and naming and, more generally, knowing its geographic and natural features. And ultimately, after a little-known decision by FDR to colonize Antarctica, claiming territory meant establishing full-time bases on the White Continent. The end of the Second World War would see one last scramble for polar territory, but the onset of the International Geophysical Year in 1957 would launch a cooperative effort to establish scientific bases across the continent. And with the Antarctic Treaty, science was in the ascendant, and cooperation rather than competition was the new watchword on the ice. Tracing history from the first sighting of land up to the present day, Antarctica is a fascinating exploration of this deeply alluring land and man's struggle to claim it.

David Day has been a research fellow at Clare College in Cambridge and a Visiting Professor at University College Dublin, the University of Aberdeen, and the Center for Pacific and American Studies at the University of Tokyo. He is currently a research associate at La Trobe University in Melbourne. He is the author of many books, including Conquest: How Societies Overwhelm Others and the award-winning Claiming a Continent: A History of Australia.