America's Snake: The Rise and Fall of the Timber Rattlesnake (Hardcover) 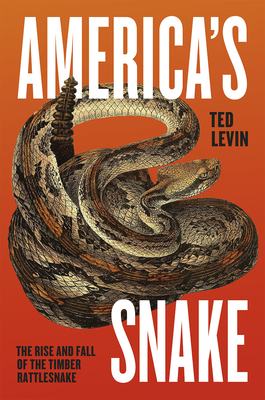 There’s no sound quite like it, or as viscerally terrifying: the ominous rattle of the timber rattlesnake. It’s a chilling shorthand for imminent danger, and a reminder of the countless ways that nature can suddenly snuff us out.

Yet most of us have never seen a timber rattler. Though they’re found in thirty-one states, and near many major cities, in contemporary America timber rattlesnakes are creatures mostly of imagination and innate fear.

Ted Levin aims to change that with America’s Snake, a portrait of the timber rattlesnake, its place in America’s pantheon of creatures and in our own frontier history—and of the heroic efforts to protect it against habitat loss, climate change, and the human tendency to kill what we fear. Taking us from labs where the secrets of the snake’s evolutionary history are being unlocked to far-flung habitats whose locations are fiercely protected by biologists and dedicated amateur herpetologists alike, Levin paints a picture of a fascinating creature: peaceable, social, long-lived, and, despite our phobias, not inclined to bite. The timber rattler emerges here as emblematic of America and also, unfortunately, of the complicated, painful struggles involved in protecting and preserving the natural world.

A wonderful mix of natural history, travel writing, and exemplary journalism, America’s Snake is loaded with remarkable characters—none more so than the snake at its heart: frightening, perhaps; endangered, certainly; and unquestionably unforgettable.

A former Bronx Zoo zoologist, Ted Levin is the author of Blood Brook: A Naturalist’s Home Ground, Backtracking: The Way of the Naturalist, and Liquid Land: A Journey through the Everglades, which won the Burroughs Medal in 2004. He has written for Sports Illustrated, Audubon, National Wildlife, National Geographic Traveler, and other publications.

"The compelling story of a much-maligned critter. . . . Levin's adventures with herpetologists and dedicated amateur reptile enthusiasts will enlighten and entertain; the not-so-careful work of poachers and bounty hunters will disgust. The author's wry humor peppers the text. . . . Sensitive to the singular beauty of the snakes, Levin is also exquisitely attuned to the larger rhythms of nature, as alive to what's singing in the trees as what's slithering in the leaves underfoot. This book resonates with wit, love, and wonder--a feat, considering the vexed reputation of its subject. Readers, perhaps even ophidiophobic ones, will come away with a fresh appreciation for a creature with 'the toxic bite and admonishing tail.'"

"America's Snake explains the history and decline of one of the more besieged species of rattlesnake, the timber rattlesnake. . . . Levin provides the reader with a comprehensive overview of rattlesnake biology, as well as setting out the current threats to the species' persistence. . . . His portrayals of scientists, reptile breeders, and nature enthusiasts are particularly refreshing."
— Times Literary Supplement

“Levin brings to his study a poet’s touch and makes our long battle with rattlers emblematic of a larger story.”
— The Week

"One of the ten best nature books of the year. Ted Levin's passionate, eloquent book is a prolonged love letter to the American timber rattler, a horn-faced engine of venom that Levin nevertheless finds not only beautiful but inspiring. And regardless of how many times you yourself may have been bitten by this allegedly peaceful creature, you’ll certainly find the book’s prose beautiful and inspiring."
— Steve Donoghue, Open Letters Monthly

"One of the ten best conservation and environment books of the year. . . . I especially enjoyed the lovely blend of science, journalism and travelogue."
— Grrl Scientist

"Just writing an entire book about a single species is an accomplishment. That it is so well done and enjoyable is a bonus."
— Farm and Dairy

"I'm not sure I would have believed in advance that someone could write 500 fascinating pages about a single species of rattlesnake, but Ted Levin has done just that. America’sSnake is so engaging the reading borders on effortless; the writing is masterful, inspiring non-stop interest and confidence in Levin's scholarship. The book will be of interest to herpetologists and conservationists, as well as to everyone concerned with how we can live with dangerous animals."

"The marriage of a great writer and a great subject is always a joy to behold. And few subjects could be more iconic, or more fascinating, than Crotalus Horridus, whose very name tells you that there's a deep story to be told here."

"'Are you crazy?,' they kept asking. No, because Ted Levin was going to be with me as I walked among rattlesnakes placidly heading for their bouldery den-site among the fallen leaves of autumn (was I crazy?). Everything about them was surprising: their docility, their beauty--and how knowledgeably Ted loved them. His writing shows how much we can see when we open up and look, how much there is to be awed by, even in creatures we most fear. This is a deep, wise book that delivers way more than you’d expect. You'll begin reading about a legless being almost universally dreaded and reviled. And you’ll come away snake-charmed and enchanted by the sacred improbability of the living world."
— Carl Safina, author of Beyond Words