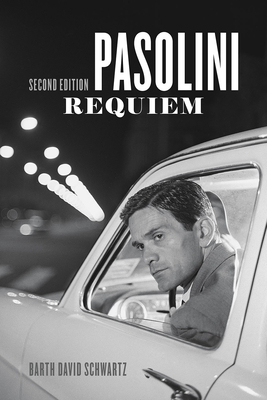 By Barth David Schwartz
This item is not available.

Pier Paolo Pasolini (1922–75) was one of the most important Italian intellectuals of the post–World War II era. An astonishing polymath—poet, novelist, literary critic, political polemicist, screenwriter, and film director—he exerted profound influence on Italian culture up to his untimely death at the age of fifty-three. This revised edition of what the New York Times Book Review has called “the standard Pasolini biography” introduces the artist to a new generation of readers.

Based on extensive interviews with those who knew Pasolini, both friends and enemies, admirers and detractors, Pasolini Requiem chronicles his growth from poet in the provinces to Italy’s leading “civil poet”; his flight to Rome in 1950; the scandalous success of his two novels and political writing; and his transition to film, where he started as a contributor to the golden age of Italian cinema and ended with the shocking Salò, or the 120 Days of Sodom. Pasolini’s tragic and still unsolved murder has remained a subject of contentious debate for four decades. The enduring fascination with who committed the crime—and why—reflects his vital stature in Italy’s political and social history.

Updated throughout and with a new afterword covering the efforts to reopen the investigation—and the legal maelstrom surrounding Pasolini’s demise—this edition of Pasolini Requiem is a riveting account of one of the twentieth century’s most controversial, ever-present iconoclasts.

Barth David Schwartz, a Rhodes Scholar who earned degrees from Harvard College and Yale Law School, is a writer based in Baltimore, Maryland. His work has appeared in the Wall Street Journal, New Republic, Fortune, and Scientific American, among other publications.