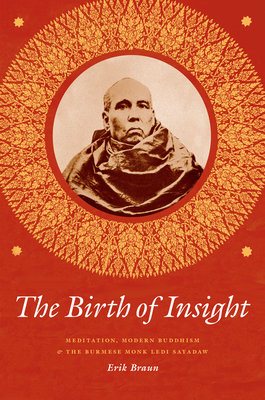 By Erik Braun
This item is not available.

Insight meditation, which claims to offer practitioners a chance to escape all suffering by perceiving the true nature of reality, is one of the most popular forms of meditation today. The Theravada Buddhist cultures of South and Southeast Asia often see it as the Buddha’s most important gift to humanity. In the first book to examine how this practice came to play such a dominant—and relatively recent—role in Buddhism, Erik Braun takes readers to Burma, revealing that Burmese Buddhists in the colonial period were pioneers in making insight meditation indispensable to modern Buddhism.

Braun focuses on the Burmese monk Ledi Sayadaw, a pivotal architect of modern insight meditation, and explores Ledi’s popularization of the study of crucial Buddhist philosophical texts in the early twentieth century. By promoting the study of such abstruse texts, Braun shows, Ledi was able to standardize and simplify meditation methods and make them widely accessible—in part to protect Buddhism in Burma after the British takeover in 1885. Braun also addresses the question of what really constitutes the “modern” in colonial and postcolonial forms of Buddhism, arguing that the emergence of this type of meditation was caused by precolonial factors in Burmese culture as well as the disruptive forces of the colonial era. Offering a readable narrative of the life and legacy of one of modern Buddhism’s most important figures, The Birth of Insight provides an original account of the development of mass meditation.

Erik Braun is associate professor in the Department of Religious Studies at the University of Virginia.

“This is an exemplary work within the history of religions with its careful argumentation and substantial evidence for the foundation of vipassana meditation to be located within the ideas of an important nineteenth-century Burmese monk. This book will be important reading for students in the history of religions and Southeast Asian studies, and those interested in meditation and Buddhism.”

“Masterful. . . . This is an excellent study, one that will deservedly become a classic in the field and make possible many other studies of the history of Burmese Buddhism.”

“Provides a detailed and masterfully contextualized analysis of the innovative career of Ledi Sayadaw. . . . Because of Ledi’s multi-faceted influence, the book will be of interest to scholars working on both Southeast Asian and Western Buddhism, as well as researchers interested in religion and its relationship with colonialism, modernity, or communication developments.”

“An erudite and thoughtful investigation of a remarkable man and his crucial role in the development of modern Burmese Buddhism. Moreover, from a methodological viewpoint, Braun’s study exhibits a formidable command of primary-source materials that are seamlessly woven into a direct narrative style in a manner that highlights the inseparability of individual historical agents, traditional religious beliefs, and modern political activity.”

“Thought-provoking . . . . Braun’s discussion of Ledi Sayadaw as an ‘improviser,’ for whom the traditional Buddhist context mattered more than colonialism, is an important contribution to the understanding of national agency in colonial Asia. . . . [An] assiduous and judicious study of the relevant literature.”

“The Birth of Insight represents an important addition to current scholarship on modern Burmese Buddhism, which has broader implications for our understanding of contemporary Buddhism in South and Southeast Asia and global Buddhism generally. Engaging and challenging, it restores the study of ‘texts’ to the repertoire of tools at our disposal for the critical examination of Burmese tradition.”
— Patrick Pranke, University of Louisville

“Insight meditation (vipassana) is increasingly central to the modern practice of Buddhism, worldwide; mindfulness practices (sati) are ever more widely used in contemporary western psychotherapies. Tracing the genealogy of these developments takes us to nineteenth- and twentieth-century Burma, and Erik Braun’s fascinating and lucid account of Ledi Sayadaw provides a detailed and illuminating historical context, notably in relation to colonialism, for the beginnings of the whole process. A final chapter describes Ledi’s influence on other teachers in Burma, and through them on the American disciples who brought the techniques to the West.  A very fine book.”
— Steven Collins, University of Chicago

“Erik Braun’s superbly researched, elegantly crafted, and eminently accessible book is the most authoritative study to date of Ledi Sayadaw and the origins of the modern Buddhist meditation revival in Burma. But its significance goes well beyond the confines of twentieth-century Burmese history. Ledi Sayadaw and his followers laid the foundation for ‘Buddhist modernism,’ and by the last quarter of the twentieth century their innovative—if sometimes controversial—approach to Buddhist doctrine and practice had spread to the rest of Asia, as well as to Europe, America, and beyond. Braun’s account of their achievements should be required reading for anyone interested in the roots of modern ‘insight’ (or ‘mindfulness’) meditation practice.”
— Robert H. Sharf, University of California, Berkeley