Giza and the Pyramids: The Definitive History (Hardcover) 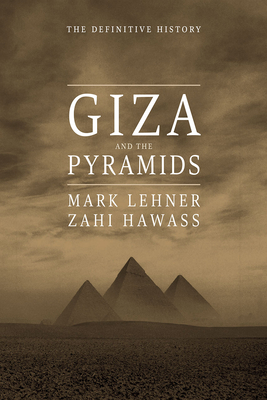 The pyramids of Giza have stood for more than four thousand years, fascinating generations around the world. We think of the pyramids as mysteries, but the stones, hieroglyphs, landscape, and even layers of sand and debris around them hold stories. In Giza and the Pyramids: The Definitive History, two of the world’s most eminent Egyptologists, Mark Lehner and Zahi Hawass, provide their unique insights based on more than four decades of excavating and studying the site.

The celebrated Great Pyramid of Khufu, or Cheops, is the only one of the seven wonders of the ancient world still standing, but there is much more to Giza. Though we imagine the pyramids of Khufu, Khafre, and Menkaure and the Sphinx rising from the desert, isolated and enigmatic, they were once surrounded by temples, noble tombs, vast cemeteries, and even harbors and teeming towns. This unparalleled account describes that past life in vibrant detail, along with the history of exploration, the religious and social function of the pyramids, how the pyramids were built, and the story of Giza before and after the Old Kingdom. Hundreds of illustrations, including vivid photographs of the monuments, excavations, and objects, as well as plans, reconstructions, and images from remote-controlled cameras and laser scans, help bring these monuments to life.

Through the ages, Giza and the pyramids have inspired extraordinary speculations and wild theories, but here, in this definitive account, is the in-depth story as told by the evidence on the ground and by the leading authorities on the site.

Mark Lehner is a research associate at the Oriental Institute of the University of Chicago and president of the nonprofit research organization Ancient Egypt Research Associates. His books include The Complete Pyramids: Solving the Ancient Mysteries. Zahi Hawass has been both Egypt’s secretary general of the Supreme Council of Antiquities and its minister for antiquities. He is the author of many books, including The Lost Tombs of Thebes and King Tutankhamun.

“In preparation for 30 years, this 560-page, large-format, semi-popular volume is a treasure trove of information on the archaeology of the Giza Plateau. Lehner and Hawass are among the most active and well-respected scholars to work at Giza in recent times. Coverage begins with the history of exploration and a discussion of the geology and topography of the plateau, then proceeds to detailed descriptions accompanied by hundreds of illustrations, often in color, of all the known archaeological remains spanning the period from the First Dynasty (c. 2920–2730 BCE) to the Late Period (c. 722–332 BCE). . . .Notes and an up-to-date bibliography conclude this very well-written and well-documented volume. There is no doubt that anyone interested in the ruins of Giza should consult this volume. . . .Essential.”
— Choice

"Giza and the Pyramids is an extraordinary treatment of these fascinating monuments, and of the complexity of archaeological remains that surround them. Many archaeologists have explored aspects of Giza, but this collaborative volume by Mark Lehner and Zahi Hawass brings together two of the most outstanding. Each has made important discoveries about Giza throughout their careers, but they also have a complete grasp of the vast scholarly literature Giza has generated, and present it in an accessible and stimulating form for scholar and lay enthusiast alike. The information provided is in the most up-to-date form the reader would wish, and complemented by many outstanding illustrations and informative diagrams."
— David O'Connor, Institute of Fine Arts at New York University

"Egypt’s pyramids, especially the Great Pyramid at Giza, have long been the object of fantasy explanations. Here two of the most eminent figures in the archaeology of ancient Egypt combine the experience of years of directing excavations at the site of the Giza pyramids to provide the reader with the solid foundations for a factual understanding of these amazing monuments. Learn from a wealth of beautifully illustrated information what their purpose really was and how they were built. The pyramids remain a marvel, but one that can be rationally understood, as demonstrated in this outstanding book."
— Barry Kemp, Cambridge University