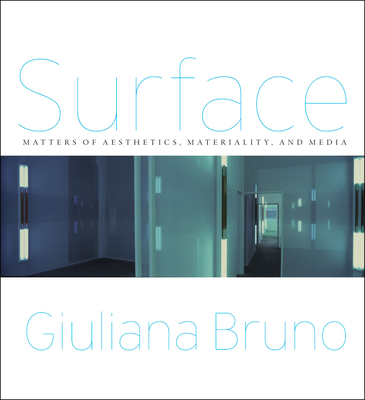 By Giuliana Bruno
This item is not available.

What is the place of materiality—the expression or condition of physical substance—in our visual age of rapidly changing materials and media? How is it fashioned in the arts or manifested in virtual forms? In Surface, cultural critic and theorist Giuliana Bruno deftly explores these questions, seeking to understand materiality in the contemporary world.

Arguing that materiality is not a question of the materials themselves but rather the substance of material relations, Bruno investigates the space of those relations, examining how they appear on the surface of different media—on film and video screens, in gallery installations, or on the skins of buildings and people. The object of visual studies, she contends, goes well beyond the image and engages the surface as a place of contact between people and art objects. As Bruno threads through these surface encounters, she unveils the fabrics of the visual—the textural qualities of works of art, whether manifested on canvas, wall, or screen. Illuminating the modern surface condition, she notes how façades are becoming virtual screens and the art of projection is reinvented on gallery walls. She traverses the light spaces of artists Robert Irwin, James Turrell, Tacita Dean, and Anthony McCall; touches on the textured surfaces of Isaac Julien’s and Wong Kar-wai’s filmic screens; and travels across the surface materiality in the architectural practices of Diller Scofidio + Renfro and Herzog & de Meuron to the art of Doris Salcedo and Rachel Whiteread, where the surface tension of media becomes concrete. In performing these critical operations on the surface, she articulates it as a site in which different forms of mediation, memory, and transformation can take place.

Giuliana Bruno is the Emmet Blakeney Gleason Professor of Visual and Environmental Studies at Harvard University. She is the author of several books, including Atlas of Emotion: Journeys in Art, Architecture and Film, winner of the Kraszna-Krausz prize for best Moving Image Book; Streetwalking on a Ruined Map, winner of the Society for Cinema and Media Studies book award; Public Intimacy: Architecture and the Visual Arts; and Surface: Matters of Aesthetics, Materiality, and Media.

“Screen theory—the use of screens specifically in technology-rich applications such as personal computing—has been the primary domain of new media scholars. Bruno extends and enriches the discourse by both carefully considering the material qualities of digital manifestations of the screen and integrating discussion of nondigital equivalents.”

“Bruno’s latest book is that rarest of gems: a patient and profound intellectual engagement, sweeping in scope, which is nonetheless a pleasure to read. . . . Give[s] us a critical vocabulary for engaging with the growing conflation of screen practices and screen architectures.”

“Beautiful and complex. . . . The readings in the book become a way of revealing hidden relationships between different forms of media, relationships that currently shift and that negotiate the question of the dividing line between work, world and viewer in ways that prompt us to re-consider the nature of those very divisions. . . . Hugely impressive.”

"Weaving together intricate material relations between art and architecture, film and fashion, design and new media renderedwithin contemporary visual culture, Bruno constructs a surface equally adept at providing space for leaping from or, for that matter, diving deeper within."
— art4d

“An enthralling enquiry into materiality and the image in the virtual age.”
— Journal of Visual Culture

"Material ways of understanding visual culture through synesthetic embodiment, the modalities of movement that relate to philosophical ways of elaborating spectatorship, and the sort of post-phenomenological vocabulary that was visible in how for example some of Gilles Deleuze’s philosophy entered academic debates in the 1990s. In Atlas of Emotion, this is visible in notions such as texturology that also reappears and becomes more central years later in Bruno’s later book Surface. Textures—including architextures—are part of both the artistic materiality of collections, museums, maps, but also fashion/textiles where cinema finds itself articulated before and after its 'birth.'"
— Leonardo

“In this finely crafted and evocative book, Bruno weaves a deep archaeology of the screen. Architecture, art, fashion, film, and philosophy find themselves embedded in the folds of a single sensuous fabric. Vision itself becomes tactile, and we begin to grasp the digital.”

“This is a unique book, in both form and content. Ranging from essay to diary to the epistolary, and from the work of Wong Kar-Wai to Walead Beshty, architects Herzog & de Meuron, Sally Potter, and Issey Miyake, Bruno traces a cultural about-face regarding our tendency to denigrate surfaces as superficial. Surfaces here are instead meeting-places, zones of encounter and admixture—the precise site that painting, cinema, architecture, fashion, or even the body all share, and where increasingly today they are transformed.”

"The resulting argument is a tour de force of aesthetic interpretation that is honed to a distinctly theoretical end . . . Simply by compelling us to contemplate what we would want from an aesthetic materialism worthy of the name—and doing so by mounting a virtuosic performance of her own deeply aesthetic response to that problem—Bruno has done a tremendous amount to reframe the matter of materialism today."
— Critical Inquiry