The Ruins Lesson: Meaning and Material in Western Culture (Hardcover) 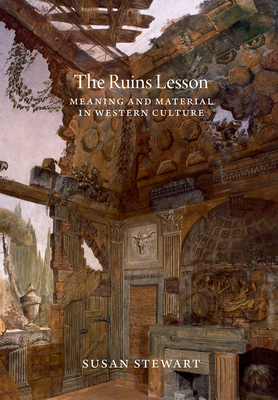 How have ruins become so valued in Western culture and so central to our art and literature? Covering a vast chronological and geographical range, from ancient Egyptian inscriptions to twentieth-century memorials, Susan Stewart seeks to answer this question as she traces the appeal of ruins and ruins images, and the lessons that writers and artists have drawn from their haunting forms.

Stewart takes us on a sweeping journey through founding legends of broken covenants and original sin, the Christian appropriation of the classical past, and images of decay in early modern allegory. Stewart looks in depth at the works of Goethe, Piranesi, Blake, and Wordsworth, each of whom found in ruins a means of reinventing his art. Lively and engaging, The Ruins Lesson ultimately asks what can resist ruination—and finds in the self-transforming, ever-fleeting practices of language and thought a clue to what might truly endure.

Susan Stewart is the Avalon Foundation University Professor in the Humanities and director of the Society of Fellows in the Liberal Arts at Princeton University. A former MacArthur fellow, she is the author of five earlier critical studies, including Poetry and the Fate of the Senses (2002), winner of the Christian Gauss award of the Phi Beta Kappa Society and the Truman Capote Award. She is also the author of five books of poems, most recently Red Rover (2008) and Columbarium (2003), winner of the National Book Critics Circle Award. These titles, along with The Open Studio (2005) and The Forest (1995), are all published by the University of Chicago Press.

“Why is it, Susan Stewart asks in her deeply researched and gracefully written book The Ruins Lesson, that 'we so often are drawn—in schadenfreude, terror, or what we imagine is transcendence—to the sight of what is broken, damaged, and decayed?'. . . . Stewart is among our most erudite readers of poetry. She is a philologist in the old-fashioned sense: a scholar who combines knowledge of several European and classical languages, a historical awareness of the development and interaction of their literary traditions, and a commitment to philosophical aesthetics that one feels even in her close readings. But she is also a poet, and writes with unfaltering clarity and poise. Finally (a word Stewart might object to), she is a discerning art critic—a skill on full display in her new book.”
— Robyn Creswel

"Stewart, a distinguished poet, a former MacArthur fellow and a Princeton professor of the humanities, charts the West’s fascination with decayed remains, from Egyptian relics to contemporary monuments of destruction and trauma. The Ruins Lesson is a sweeping cultural history that draws in Renaissance humanism, 18th-century changes in representing the past and the Romantic reconfiguration of memory. . . . Stewart writes with poetic grace and a nonspecialist’s appreciation of printmaking, painting, literature and architecture. Readers outside the academy will find much to value in this lovely book.”
— Michael S. Roth

"Poet and critic Susan Stewart’s scholarly meditation on ruin and monument, The Ruins Lesson, couldn’t be more topical, in our time of activist iconoclasm."
— A.E. Stallings

“Susan Stewart’s The Ruins Lesson tells the story of antiquarians and what they learned from the ruins that obsessed them. Their sensibility, as she shows, was itself ancient. . . . The Ruins Lesson makes one point above all: there was no single dominant way of observing ancient ruins and portraying what remained.”
— Anthony Grafton

“Ruins weren’t always valued primarily as objects of mood and pleasure. But they’ve long held some form of aesthetic interest in the West. This history, culminating in the Romantic period, is the subject of Stewart’s peripatetic study, an idiosyncratic expedition through the centuries. . . . As motivations, methods, and means vary across geography and history, what remains constant is this: ruins captivate, and ruins provoke a response.”

“Stewart’s new book details the long history of Western fascination of contemplating what Shakespeare describes (in Sonnet 55) as ‘unswept stone besmear’d with sluttish time.’ . . . Stewart contends that the immediate emotional impact of looking at a ruin is a reminder of our own deaths, since, unlike a heap of rubble, a ruin bears some traces of what it once was before its fall. . . . . Stewart expects much of her readers, but her writing is also forceful and clear.”

"Susan Stewart’s new book has a finely wrought section on the Romantics, but the special interest of this book is its transhistorical scope and imaginative amplitude. For forty years now, [Stewart] has been one of our most admired poet-critics. . . . This latest title arrives as an elegiac, crowning monument on the perennial entanglement between les mots et les choses of European civilization. This is simply the best work on the aesthetics of ruins out there."

“[A] minutely researched and beautifully written study of the enduring allure of ruins and ruination in Western culture. Poised between preservation and obliteration, ruins represent both a presence and an absence that give rise to a range of complex and sometimes contradictory responses. Stewart contemplates Western ruin appreciation in a myriad of forms, teasing out the connections and correspondences among an impressively diverse array of literary and visual sources.”
— Sarah Tiffin

"The exploration of ruins in the context of 18th-century travel culture is but one of many topics discussed in this beautifully written study, which addresses scholars from a range of fields as well as interested readers. Examining why ruins, as ‘damaged and disappearing vestiges of the built environment, became so significant in Western art and literature’, Stewart’s study centers on exploring the complex intermedial development, changes, and afterlives of semantic fields, cultural ideas, images, and metaphors."
— Miriam Volmert

"The question Stewart seeks to answer in her lucid, erudite, and extensively researched cultural history is the following: why are ruins, which damage the comfort of permanence, such a preoccupation for Western art and literature? . . . The Ruins Lesson is the most comprehensive treatment of ruins in European cultural history and displays Stewart’s tremendous expertise in analysis of the visual arts, architecture, and poetry. It is an elegant and immersive read."
— Tanvi Solanki

"Lively and engaging, The Ruins Lesson ultimately asks what can resist ruination—and finds in the self-transforming, ever-fleeting practices of language and thought a clue to what might truly endure."
— Paul Duclos

"Ruins have long provided a uniquely rich subject for aesthetic meditation and for poetic and visual representation. . . . Stewart has explored this material with a graceful touch that should prove accessible and inviting to educated general readers. The best pages of the book are given over, fittingly, to the brilliant 18th-century engraver Giovanni Battista Piranesi, whose specialty was what he called 'parlanti ruine': speaking ruins."
— Choice

"One’s heart leaps at Susan Stewart’s beautifully produced The Ruins Lesson: with eighty high-resolution illustrations and eleven colorful plates set in 7 x10 ?, the book is a collectable work of art in itself."
— Modern Philology

“At the crossroads of transience and endurance, form and chaos, memory and materiality, ruins have been among the most poignant markers of the vain human struggle to resist the ravages of time. Drawing on an astonishing range of examples from the histories of art and literature, Stewart brings to their interpretation her unique gifts of analytic acumen and poetic evocation. The Ruins Lesson is a master class in cultural criticism, revealing the sweet melancholy that fuels our fascination with the shards, fragments, and torsos of things past.”
— Martin E. Jay, University of California, Berkeley

“The Ruins Lesson explores ruins without end and ruins as an end in themselves in Western culture—autotelic ruins. Wordsworth’s phrase ‘decaying never to be decayed’ signals the Romantic fascination with ruination that Stewart’s erudite book traces from the classical past to its culmination in the work of Goethe, Piranesi, Blake, and Wordsworth. Through dazzlingly imaginative connections and compelling visual illustrations, Stewart argues that ruins are at once the sign of what remains forever unfinished and sites for discovery. Ruins are the vestiges and traces by which the past inspires the future; whether in printmaking, aesthetics, or poetry, they offer a critique of a materialist approach to art.”
— Mary Jacobus, University of Cambridge

"Susan Stewart’s The Ruins Lesson: Meaning and Material in Western Culture is an ambitious journey through the visual and literary culture of architectural ruins... This is, in short, a magisterial, informative, and engaging book."
— Eighteenth-Century Studies

“In this expansive, beautifully wrought history of how ruins are imagined, they become sites of wonder, play, and love, places of making as well as places of destruction. In taking up the lessons of ruins, the book explores the varied, volatile forms in which we imagine and remember and care for, or fail to care for, the made and given world. That care shows itself in Stewart’s own quality of attention, the range of her curiosity, the depth of her scholarship, the risk of her thought. This is cultural history as poetic phenomenology.”
— Kenneth Gross, University of Rochester