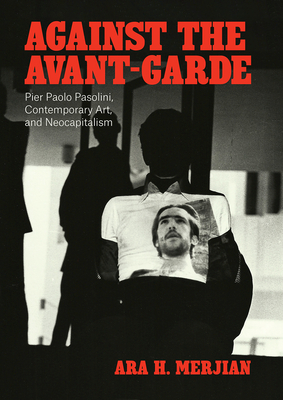 Recognized in America chiefly for his films, Pier Paolo Pasolini (1922–1975) in fact reinvented interdisciplinarity in postwar Europe. Pasolini self-confessedly approached the cinematic image through painting, and the numerous allusions to early modern frescoes and altarpieces in his films have been extensively documented. Far less understood, however, is Pasolini’s fraught relationship to the aesthetic experiments of his own age. In Against the Avant-Garde, Ara H. Merjian demonstrates how Pasolini’s campaign against neocapitalist culture fueled his hostility to the avant-garde. An atheist indebted to Catholic ritual; a revolutionary communist inimical to the creed of 1968; a homosexual hostile to the project of gay liberation: Pasolini refused the politics of identity in favor of a scandalously paradoxical practice, one vital to any understanding of his legacy. Against the Avant-Garde examines these paradoxes through case studies from the 1960s and 1970s, concluding with a reflection on Pasolini’s far-reaching influence on post-1970s art. Merjian not only reconsiders the multifaceted work of Italy’s most prominent postwar intellectual, but also the fraught politics of a European neo-avant-garde grappling with a new capitalist hegemony.

Ara H. Merjian is professor of Italian Studies at New York University, where he is an affiliate of the Institute of Fine Arts and the Department of Art History. He is a member of the College of Professors in the Department of History, University of Milan, and the author of Giorgio de Chirico and the Metaphysical City: Nietzsche, Modernism, Paris and Blueprints and Ruins: Giorgio de Chicrico and the Architectural Imagination from the Avant-Gardes to Postmodernism, both from Yale University Press.

“Merjian’s new book helps us untangle the idiosyncrasies of this polyhedric modern movement. Casting a lucid gaze into a recent but culturally impervious past, Against the Avant-Garde conjures the complexities of Pasolini’s visual, material, and ideological context to show us how much he resisted it and how much, at the same time, he belonged to it.”
— Europe Now

“Fluently interweaving the histories of film, literature, and the visual arts in postwar Italy, Against the Avant-Garde is as ‘extravagantly interdisciplinary’ as its subject, the director, author, and polemicist Pier Paolo Pasolini, himself claimed to be. With admirable subtlety, Merjian sets out, not so much to accord him a place within the established trajectory of art history—from the abstract informalist painting of the 1950s through the body art of the 1970s—but to highlight the inconvenience and untimeliness of Pasolini’s resolute critique of his neo-avant-garde contemporaries. Better still, Merjian manages to preserve a sense of the urgency with which Pasolini condemned a voracious postwar capitalism, with all its powers of consumerist seduction, as the necessary context for his resistance to so much of the art of his time—all the while inspiring us to return to the films and the artworks the author addresses with new, more discerning eyes.”
— Tom McDonough, author of “The Beautiful Language of My Century”: Reinventing the Language of Contestation in Postwar France, 1945–1968

“Merjian’s new book is an illuminating, acute analysis of Pier Paolo Pasolini’s hostility to the avant-garde, which he regarded as a form of expression that is subaltern to neocapitalism and its cult of the new. Merjian skillfully examines the paradoxical use of avant-garde strategies such as abstraction, self-reflexivity, and performance in Pasolini’s own vast interdisciplinary work, most especially in his films and paintings. The result is a tour de force of contemporary scholarship that establishes Merjian as one of the most authoritative, erudite, and imaginative scholars of Pasolini’s work and a leading cultural critic of our day.”
— Alessia Ricciardi, author of After La Dolce Vita: A Cultural Prehistory of Berlusconi's Italy

“Against the Avant-Garde stands out as a very original interdisciplinary study based on rigorous scholarship and critical finesse. It contains brilliant insights, both about individual works and about wider patterns in Pasolini’s extensive corpus. Merjian shows a deep knowledge of the works discussed, the historical situation in which Pasolini realized them, and the fraught relationship between Pasolini and the Italian art scene.”
— Gian-Maria Annovi, author of Pier Paolo Pasolini: Performing Authorship

"...this rigorous, minutely documented, and beautifully illustrated book makes a solid case for the relevance of Pasolini’s legacy, exploring how its influence surfaces in work by artists as disparate as ’80s art star and now filmmaker Julian Schnabel (himself a multidisciplinarian in the busy Pasolini mode) and the zanies behind the Monty Python films (yes, you read that right)."
— The Arts Fuse

"As Merjian traces Pasolini’s influence down to the present the sheer number of artists and works that have paid tribute to him is surprising. Yet as Merjian’s study reminds us, Pasolini remains unrivalled in Italy, and maybe beyond, among artists of the immediate post-war period as a charismatic figure of independence and resistance."
— The Burlington Magazine