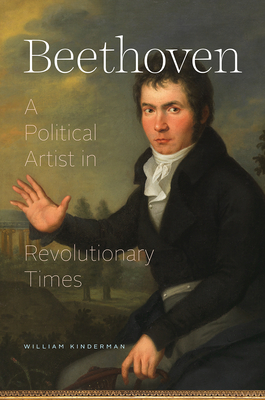 We have long regarded Beethoven as a great composer, but we rarely appreciate that he was also an eminently political artist. This book unveils the role of politics in his oeuvre, elucidating how the inherently political nature of Beethoven’s music explains its power and endurance.

William Kinderman presents Beethoven as a civically engaged thinker faced with severe challenges. The composer lived through many tumultuous events—the French Revolution, the rise and fall of Napoleon Bonaparte, and the Congress of Vienna among them. Previous studies of Beethoven have emphasized the importance of his personal suffering and inner struggles; Kinderman instead establishes that musical tensions in works such as the Eroica, the Appassionata, and his final piano sonata in C minor reflect Beethoven’s attitudes toward the political turbulence of the era. Written for the 250th anniversary of his birth, Beethoven takes stock of the composer’s legacy, showing how his idealism and zeal for resistance have ensured that masterpieces such as the Ninth Symphony continue to inspire activists around the globe. Kinderman considers how the Fifth Symphony helped galvanize resistance to fascism, how the Sixth has energized the environmental movement, and how Beethoven’s civic engagement continues to inspire in politically perilous times. Uncertain times call for ardent responses, and, as Kinderman convincingly affirms, Beethoven’s music is more relevant today than ever before.

William Kinderman is professor of music and the Leo M. Klein and Elaine Krown Klein Chair in Performance Studies at the University of California, Los Angeles. His many books include Beethoven, The Creative Process in Music from Mozart to Kurtág, and, most recently, Wagner’s “Parsifal.”

“Kinderman’s study shows how the great composer maneuvered in times much like our Trumpian own. . . . Hardly a page goes by in [this] superbly written book without offering an unexpected reason to care about Beethoven.”
— Mark Swed

“William Kinderman, in Beethoven: A Political Artist in Revolutionary Times, reinforces the picture of a fundamentally liberal-minded artist, and gives a telling portrait of the composer.”
— Alex Ross

"Kinderman focuses on Beethoven’s lifelong belief in freedom and progress as universal ideals that found expression in his music in all periods of his life in ways that continue to resonate to the present day. . . . The book makes a valuable contribution to our understanding of Beethoven as a politically engaged artist and reveals politics to be a vital context for some of his most important works."
— Erica Buurman

“Drawing on letters, sketchbooks, manuscripts, and abundant scholarship, concert pianist and music scholar Kinderman argues convincingly that Beethoven (1770-1827) was 'far from indifferent' to political events that roiled Europe during his lifetime. Offering minutely close exegeses of Beethoven’s works. . . . Kinderman shows how the composer responded to the 'tensions and contradictions' of the time.”
— Kirkus Reviews

"Pianist and composer Kinderman adds to his shelf of well-regarded contributions to the Beethoven literature with this appealing title focusing on how the political and philosophical movements of the late 1700s to early 1800s influenced the composer’s creative development. . . . Kinderman’s exhaustive scholarship and fluid style combine with up-to-date references to issues such as systemic repression and other provocative topics, which should resonate with both academics and informed general readers."
— Library Journal

"Written for his 250th anniversary, this biography presents the great composer as a civically engaged thinker, living through tumultuous times, and shows how his music continues to inspire activists around the world to this day."
— The Bookseller

“Kinderman has written a fresh and fascinating book packed with intriguing thoughts and unexpected alignments about how Beethoven’s politics translated themselves into Beethoven’s music. This is a book that awakens the reader not only with its content but with the love and enthusiasm of its author.”
— Patrick Summers, artistic and music director, Houston Grand Opera

“This book is a timely contribution to the current trend toward interpreting art primarily in political terms. Placing his aesthetic commentary in a well-grounded biographical and historical context, Kinderman illuminates the political aspects of Beethoven’s life and outlook. He goes on to discuss the ways in which a number of Beethoven’s important works reflect the composer’s lifelong belief in freedom and progress as both personal and universal values.”
— Lewis Lockwood, author of 'Beethoven: The Music and the Life'

“With a keen ear attuned to both musical and historical salience, Kinderman reveals the animating presence of the political in almost every aspect of Beethoven’s life, his work, and his legacy. In doing so, he illuminates the crucial context from which to assess Beethoven’s astonishing achievement of a moral ideal that has resounded from the Age of Revolution to our own times.”
— Scott Burnham, author of 'Beethoven Hero'

“Kinderman, one of the leading authorities on Beethoven, has succeeded here in connecting an impressive panorama of Beethoven’s life and works with the rarely touched aspect of the composer’s political leanings, an approach that yields particularly memorable insights in connection with his only opera, Leonore/Fidelio.”
— Alfred Brendel, pianist and author

“To explore Beethoven’s world as Kinderman does in this revelatory book is to confront multiple tensions and contradictions. Kinderman shows how the political relevance of Beethoven’s music remains tangible: how, for example, in an age of global warming, humanly altered weather patterns, and political indifference to environmental degradation, Beethoven’s Pastoral Symphony is ‘more pertinent than ever before.’ Kinderman combines a scholarly probing of the source material with an astute analysis of selected works by Beethoven, always rooted in their historical and political context. But what makes this beautifully written monograph so telling is the way Kinderman relates Beethoven’s passionate but erratic response to the political turmoil of his age to our own times.”
— Sir John Eliot Gardiner, conductor