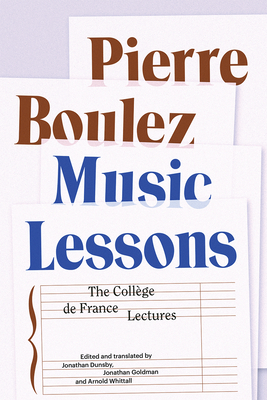 Music Lessons marks the first publication in English of a groundbreaking group of writings by French composer Pierre Boulez, his yearly lectures prepared for the Collège de France between 1976 and 1995. The lectures presented here offer a sustained intellectual engagement with themes of creativity in music by a widely influential cultural figure, who has long been central to the conversation around contemporary music. In his essays Boulez explores, among other topics, the process through which a musical idea is realized in a full-fledged composition, the complementary roles of craft and inspiration, and the degree to which the memory of other musical works can influence and change the act of creation. Boulez also gives a penetrating account of problems in classical music that are still present today, such as the often crippling conservatism of established musical institutions. Woven into the discussion are stories of his own compositions and those of fellow composers whose work he championed, as both a critic and conductor: from Stravinsky to Stockhausen and Varèse, from Bartók to Berg, Debussy to Mahler and Wagner, and all the way back to Bach.

Including a foreword by famed semiologist Jean-Jacques Nattiez, who was for years a close collaborator and friend of the composer, this edition is also enriched by an illuminating preface by Jonathan Goldman. With a masterful translation retaining Boulez’s fierce convictions, cutting opinions, and signature wit, Music Lessons will be an essential and entertaining volume.

"Readers can now take stock of the daunting, demanding Boulezian worldview and, whether they warm to his own works or not, appreciate him as one of the most important writers ever about music. Although Boulez was to live over 20 years after the final lecture, Music Lessons has the feel of a vast expository Gesamtkunstwerk that ponders and probes musical experience to its very essence. It ranges over music’s fundamental building blocks — its modes of organization and how we perceive it, both acoustically and culturally — to how memory both aids and interferes with the process of cognition, and on to matters of notation, style, idea, technology and tradition."
— John Adams

“What is most refreshing in Boulez’s writings is the unfashionable ambition of his questions…many passages here show him as one of the best thinkers of musical creativity of the past hundred years.”
— Times Literary Supplement

“Not since the nineteenth century has a composer of major stature written so eloquently, elegantly, and profoundly as Boulez did in these leçons. They read, engagingly, like a journal of discovery, evolution, and defining of a personal artistic aesthetic. From iconoclastic enfant terrible of the European avant-garde to the equally demanding but avuncular orchestra maestro, Boulez insists (autocratically) on the obligation of composer, performer, and listener to think about music, not just feel it. The translations are rendered sensitively and comprehensively, resulting in a book of historical significance.”
— Bernard Rands, Pulitzer Prize– and Grammy-winning composer and Bigelow Rosen Professor Emeritus, Harvard University

“While also picking up steam as a composer, appearing internationally as a conductor, and leading a computer music lab in Paris, Pierre Boulez in his fifties and sixties was bringing his theoretical contemplations to a summit in the lectures contained in this volume. This is a book to set beside Schoenberg’s Style and Idea as one of the great documents of musical thought from the last century, essential reading for young composers and all who are concerned with where we are musically, how we got here, and whither we might go.”
— Paul Griffiths, author of Modern Music: A Concise History from Debussy to Boulez

“This collection of essays by one of the crucially important figures in postwar contemporary music, representative of a renaissance in Boulez’s critical writing, illuminates far more than his musical oeuvre alone. These lectures exemplify the ways in which incisive musical thought can create a compelling staging ground for understanding the critical cultural, historical, philosophical, technological, and social issues of our time.”
— George E. Lewis, author of A Power Stronger Than Itself: The AACM and American Experimental Music

"Boulez spent his career writing and composing with intensity, and Music Lessons clearly demonstrates his ability to explain the music art form to everyone, whether they are musicians or not. Boulez was and remains an inspiration to those who call themselves artists, and Music Lessons makes his teachings more accessible than ever as the first publication in English of his groundbreaking Collège de France lectures. This book is recommended for all music lovers, from professionals to the casual listener."
— Music Reference Services Quarterly