Into the Cool: Energy Flow, Thermodynamics, and Life (Paperback) 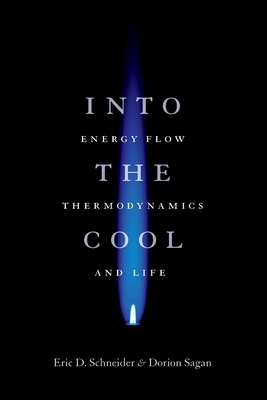 Scientists, theologians, and philosophers have all sought to answer the questions of why we are here and where we are going. Finding this natural basis of life has proved elusive, but in the eloquent and creative Into the Cool, Eric D. Schneider and Dorion Sagan look for answers in a surprising place: the second law of thermodynamics. This second law refers to energy's inevitable tendency to change from being concentrated in one place to becoming spread out over time. In this scientific tour de force, Schneider and Sagan show how the second law is behind evolution, ecology,economics, and even life's origin.

Working from the precept that "nature abhors a gradient," Into the Cool details how complex systems emerge, enlarge, and reproduce in a world tending toward disorder. From hurricanes here to life on other worlds, from human evolution to the systems humans have created, this pervasive pull toward equilibrium governs life at its molecular base and at its peak in the elaborate structures of living complex systems. Schneider and Sagan organize their argument in a highly accessible manner, moving from descriptions of the basic physics behind energy flow to the organization of complex systems to the role of energy in life to the final section, which applies their concept of energy flow to politics, economics, and even human health.

A book that needs to be grappled with by all those who wonder at the organizing principles of existence, Into the Cool will appeal to both humanists and scientists. If Charles Darwin shook the world by showing the common ancestry of all life, so Into the Cool has a similar power to disturb—and delight—by showing the common roots in energy flow of all complex, organized, and naturally functioning systems.

“Whether one is considering the difference between heat and cold or between inflated prices and market values, Schneider and Sagan argue, we can apply insights from thermodynamics and entropy to understand how systems tend toward equilibrium. The result is an impressive work that ranges across disciplinary boundaries and draws from disparate literatures without blinking.”—Publishers Weekly

Eric D. Schneider served as senior scientist at the National Oceanic and Atmospheric Administration and director of the National Marine Water Quality Laboratory of the Environmental Protection Agency. His work on thermodynamics—a topic he has pursued for more than twenty years—has been widely anthologized and cited.

Dorion Sagan is coauthor of Acquiring Genomes and Up from Dragons. Called an “unmissable modern master” of science writing by New Scientist, Sagan has written for the New York Times, Natural History, and Wired, among other publications.