Waves Across the South: A New History of Revolution and Empire (Paperback) 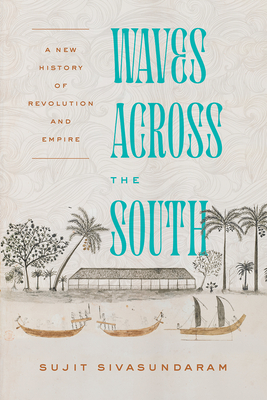 This is a story of tides and coastlines, winds and waves, islands and beaches. It is also a retelling of indigenous creativity, agency, and resistance in the face of unprecedented globalization and violence. Waves Across the South shifts the narrative of the Age of Revolutions and the origins of the British Empire; it foregrounds a vast southern zone that ranges from the Arabian Sea and southwest Indian Ocean across to the Bay of Bengal, and onward to the South Pacific and the Tasman Sea. As the empires of the Dutch, French, and especially the British reached across these regions, they faced a surge of revolutionary sentiment. Long-standing venerable Eurasian empires, established patterns of trade and commerce, and indigenous practice also served as a context for this transformative era. In addition to bringing long-ignored people and events to the fore, Sujit Sivasundaram opens the door to new and necessary conversations about environmental history, the consequences of historical violence, the legacies of empire, the extraction of resources, and the indigenous futures that Western imperialism cut short. The result is nothing less than a bold new way of understanding our global past, one that also helps us think afresh about our shared future.

Sujit Sivasundaram is professor of world history and fellow of Gonville and Caius College, University of Cambridge. He is the author of Islanded: Britain, Sri Lanka and the Bounds of an Indian Ocean Colony.

"Sivasundaram guides the reader smoothly through the expanses of the oceanic south. His account, enriched by deep archival research and the use of visual and material evidence, has a human scale and texture sometimes lacking in similar global histories. . . . The familiar ideas and figures of the Atlantic revolutionary era, from democracy to George Washington, are at best ghostly presences in this reoriented revolutionary history. Mr. Sivasundaram instead gives main billing to a 'surge of indigenous politics' that tilted heavily toward monarchism. . . . The great achievement of Waves Across the South? is that its shift of perspective lets us reconsider the meaning of revolution in the late 18th and early 19th centuries."
— Nathan Perl-Rosenthal

“Waves Across the South is an eye-opening work of global history. It globalizes the Age of Revolutions by viewing it from the Indian and Pacific Oceans, flipping the traditional narrative that places the Atlantic revolutions at the center of modern world history. With awe inspiring transnational research and interpretive imagination, Sivasundaram shows that the forces of revolution were global, and how the forces of radical change in the watery spaces of the south battled with the counter-revolution of the British Empire. This is a pioneering work that brings together the histories of empire and revolutions in a single frame.”
— Gyan Prakash, Princeton University

"Fascinating. . . Waves Across the South is an ambitious attempt to tell world history from the viewpoint of the south. . . . Sivasundaram brings to life the 'surge of indigenous politics' that marked this era."
— Financial Times

"Sivasundaram brings these vast expanses alive by seeking out 'key life stories' that offer glimpses of forgotten struggles. . . He follows little-known voyages across the southern oceans accomplished by multi-ethnic crews. . . He deftly outlines the singularity of the British Empire, though in a pre-telegraphic era of poor communication its expansion was hardly strategic. . . As Sivasundaram convincingly argues in the global South this revolutionary age was defined by the way indigenous peoples responded to Western invasion."
— Literary Review

“Waves Across the South exemplifies the very best of current writing in global history. Sivasundaram confidently surfs a dynamic wave of scholarship that has transformed the histories of the Indian Ocean and the South Pacific by looking from below—through the eyes of Indigenous peoples, the enslaved, the subjected and the global South, instead of those of the colonizer, the enslavers, the dominant or the global North. His aim is nothing less than ‘to turn the story of the dawn of our times inside out,’ by locating the birth of the modern world in the great Indo-Pacific arc from the Persian Gulf to Polynesia. . . . To call this ambitious would be an understatement. . . By recasting empire—especially the British empire—as the countervailing force in this turbulent arena, Sivasundaram brilliantly restores counter-revolution to its proper place in the Age of Revolutions.”
— David Armitage

“An Apollyonic straddling of an entire hemisphere. . . . Scrupulously, Sivasundaram tells much of this history from the ground up, from the perspectives of the colonized, and for this purpose, he taps the archives of a cast of astonishing, enjoyable characters—not rulers or officials, but regular folk.”
— The Guardian

"Waves Across the South brilliantly reconstructs how empire was made through voyages across oceans. . . . This book is an exemplar of historical writing [that] makes the oceans explode into the land."
— BBC History Magazine

“This is a breathtaking book. Sivasundaram takes the familiar story of the ‘age of revolutions’ and turns it upside down, putting the voices, the hopes, and the struggles of the seafaring peoples of the Indian and Pacific oceans at the heart of his account of how the modern world was forged. . . Global history at its finest: eloquent, surprising, and deeply moving.”
— Sunil Amrith, Yale University

“Fresh, sparkling and ground-breaking, Waves Across the South helps re-centre how we look at the world and opens up new perspectives on how we can look at regions, peoples and places that have been left to one side of traditional histories for far too long.”
— Peter Frankopian, Oxford University

“A magisterial intervention in world history, subverting and inverting our established, Atlantic conceptions of the age of revolutions by taking account of the myriad histories of the Indian and Pacific Oceans and their 'sea of islands' … This deeply researched and richly illustrated study not only demonstrates that 'we are all islanders', but also all heirs of empires forged in the oceanic South.”
— Margot Finn, president, Royal Historical Society

“Sivasundaram’s outstanding volume takes us on a gripping journey across the globe.… [This] magisterial book brings to light a world history that has so far been cast aside by many world historians. The history of colonisation has rarely established bridges between the Atlantic, the Indian Ocean and the Pacific worlds. The volume presents us with fascinating stories of communities that had strong and powerful histories and whose experiences were shaped by global forces and foreign occupation … A master class in history writing.”
— Olivette Otele, Bristol University