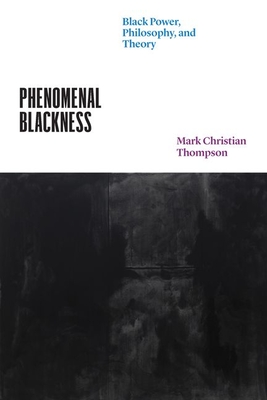 By Professor Mark Christian Thompson
This item is not available.

Prior to the 1960s, sociologically oriented thinkers such as W. E. B. Du Bois had understood Blackness as a singular set of socio-historical characteristics. In contrast, writers such as Amiri Baraka, James Baldwin, Angela Y. Davis, Eldridge Cleaver, and Malcolm X were drawn to notions of an African essence, an ontology of Black being. With these perspectives, literary language came to be seen as the primary social expression of Blackness. For this new way of thinking, the works of philosophers such as Adorno, Habermas, and Marcuse were a vital resource, allowing for continued cultural-materialist analysis while accommodating the hermeneutical aspects of Black religious thought. Thompson argues that these efforts to reimagine Black singularity led to a phenomenological understanding of Blackness—a “Black aesthetic dimension” wherein aspirational models for Black liberation might emerge.

Mark Christian Thompson is professor of English at Johns Hopkins University, where he also serves as chair of the English department. He is the author of three books, most recently Anti-Music: Jazz and Racial Blackness in German Thought between the Wars.

“Thompson’s new book focuses on major figures such as Baraka, Baldwin, Cleaver, and Davis with an admirable rigor, even austerity, that ignores the polemics and moralizing judgments that often simplify each of their reputations, the better to show the unfolding of their ideas and thinking in a new context: postwar German political thought. This demanding book is worth the reader’s effort because it yields remarkable and fresh insights as it fulfills its goal ‘to relate the brilliance of their thought in full awareness of its flaws.’”
— Ross Posnock, Columbia University

“Phenomenal Blackness is a text long awaited by many Black scholars—and essential to all of us—seeking to understand the complex origins of postwar Black cultural and aesthetic thought. Thompson’s deep and holistic dive into an entangled and phenomenal Blackness gives us back an intellectual history well-nigh lost.”
— Michelle M. Wright, Emory University

"An important and provocative intervention. . . . What is most exciting about Thomson’s book is that his intellectual history makes it possible for us to better understand contemporary trends in Black philosophy and aesthetics. Scholars such as Hortense Spillers, Fred Moten, Saidiya Hartman, Christina Sharpe, Frank Wilderson, and Jared Sexton seem to be inheritors and innovators of the tradition set forth by the African-American thinkers Thompson discusses."
— Notre Dame Philosophical Reviews