I Can Only Paint: The Story of Battlefield Artist Mary Riter Hamilton (McGill-Queen's/Beaverbrook Canadian Foundation Studies in Art History #31) (Hardcover) 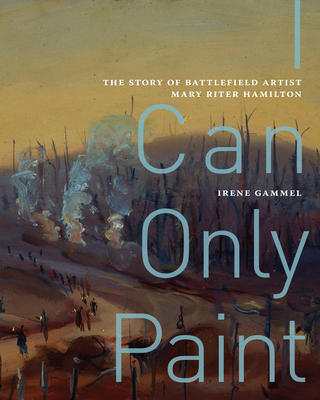 For Canadian impressionist Mary Riter Hamilton, capturing the emotional landscape of battlefields and graveyards in the months after the Great War's armistice became an artistic calling and defined her work. A woman alone after the storm had passed, she found that her life after the war was indelibly marked by the experience. Undeterred by a rejection from the Canadian War Memorials Fund, who nominated only male war artists abroad, in 1919 Hamilton received a commission from the Amputation Club of British Columbia (now the War Amps) to commemorate those lost at war. She travelled from Victoria to the pre-reconstruction battlefields and towns of the Somme, Vimy Ridge, and the Ypres Salient where amid harsh conditions - inadequate shelter and food, surroundings littered with unexploded shells - she recorded with determination, pride, and grace the ruins of war. Based on intensive archival research in Canada, France, and Belgium, and using many previously unpublished letters, I Can Only Paint offers an insider's view of the artist's vast, underexplored body of war work and the conditions in which she created it. It places this period, central though it was, in the context of a full understanding of her life and restores the work she created there to its proper place in the canon of war art in Canada and abroad. Irene Gammel argues that Hamilton's work encoded a female perspective that distinguishes her paintings from the work of official Canadian war artists. The first reliable account of Hamilton's impressions of Canada's most haunting sites of conflict, I Can Only Paint captures with detail and sensitivity an experience that defined her life and recovers a body of work that stands as a unique and enduring portrait of the effects of the Great War.

"Through her paintings, prints, and drawings, Mary Riter Hamilton (1873–1954) played a significant role in visually documenting Canada's participation in the Great War. Her endeavor was complex and physically demanding, and ultimately her health and her fortune were sacrificed to this goal. Meticulously researched, carefully documented, and handsomely illustrated, this volume provides a thorough, engaging examination of Hamilton's life." Choice

"Some of Hamilton's most arresting work springs from her observations of life returning even to the front lines. Trenches on the Somme is filled with startlingly red poppies against a grim purple sky, for instance. Two older men in white put their shovels

"As [I Can Only Paint] reveals, Hamilton had many strikes against her in the opinion of the art establishment a century ago, but her failings did not, apparently, include production of inferior or subversive art. "Walker, Brown and Shepherd," Gammel writes of the powerful gallery triumvirate, "agreed that such a troublesome woman, no matter how good her art, had no place in the nation's gallery." Galleries West Magazine

"Mary Riter Hamilton's remarkable story is one of struggle, talent, commitment, and courage. Gammel has undertaken years of painstaking research in archives and in the field but also goes far beyond the sources at hand to carry us into the aftermath of Great War catastrophe and one woman's determination to record it. I Can Only Paint brings Hamilton's human and artistic story powerfully to life, filtered through the experience and intelligence of someone who cares enough to place her before us. Brava!" Sherrill E. Grace, University of British Columbia