Junk DNA: A Journey Through the Dark Matter of the Genome (Paperback) 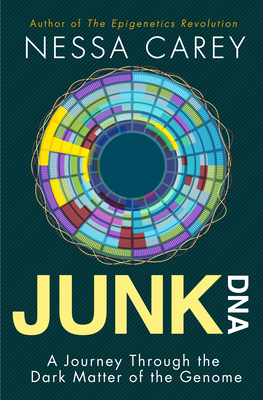 For decades after the identification of the structure of DNA, scientists focused only on genes, the regions of the genome that contain codes for the production of proteins. Other regions that make up 98 percent of the human genome were dismissed as "junk," sequences that serve no purpose. But researchers have recently discovered variations and modulations in this junk DNA that are involved with a number of intractable diseases. Our increasing knowledge of junk DNA has led to innovative research and treatment approaches that may finally ameliorate some of these conditions.

Junk DNA can play vital and unanticipated roles in the control of gene expression, from fine-tuning individual genes to switching off entire chromosomes. These functions have forced scientists to revisit the very meaning of the word "gene" and have engendered a spirited scientific battle over whether or not this genomic "nonsense" is the source of human biological complexity. Drawing on her experience with leading scientific investigators in Europe and North America, Nessa Carey provides a clear and compelling introduction to junk DNA and its critical involvement in phenomena as diverse as genetic diseases, viral infections, sex determination in mammals, and evolution. We are only now unlocking the secrets of junk DNA, and Nessa Carey's book is an essential resource for navigating the history and controversies of this fast-growing, hotly disputed field.

Nessa Carey is a visiting professor at Imperial College, London. She earned her Ph.D. in virology from the University of Edinburgh. Having worked in the biotech and pharmaceutical industries for more than a decade, she maintains strong relationships with leading researchers in Europe and across the United States, at such institutions as the Harvard Medical School, the University of Pennsylvania, the Wistar Institute, the MD Anderson Cancer Center, and the University of Southern California. Carey is also the author of The Epigenetics Revolution: How Modern Biology Is Rewriting Our Understanding of Genetics, Disease, and Inheritance.