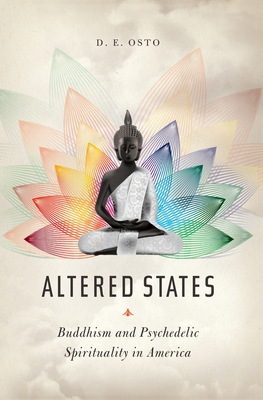 By Douglas Osto
This item is not available.

In the 1960s, Americans combined psychedelics with Buddhist meditation to achieve direct experience through altered states of consciousness. As some practitioners became more committed to Buddhism, they abandoned the use of psychedelics in favor of stricter mental discipline, but others carried on with the experiment, advancing a fascinating alchemy called psychedelic Buddhism.

Many think exploration with psychedelics in Buddhism faded with the revolutionary spirit of the sixties, but the underground practice has evolved into a brand of religiosity as eclectic and challenging as the era that created it. Altered States combines interviews with well-known figures in American Buddhism and psychedelic spirituality--including Lama Surya Das, Erik Davis, Allan Badiner, Geoffrey Shugen Arnold Sensei, Rick Strassman, and Charles Tart--and personal stories of everyday practitioners to define a distinctly American religious phenomenon. The nuanced perspective that emerges, grounded in a detailed history of psychedelic religious experience, adds critical depth to debates over the controlled use of psychedelics and drug-induced mysticism. The book also opens new paths of inquiry into such issues as re-enchantment, the limits of rationality, the biochemical and psychosocial basis of altered states of consciousness, and the nature of subjectivity.

Douglas Osto is senior lecturer in philosophy and Asian studies and program coordinator of the Asian studies program in the School of Humanities at Massey University. He is the author of Power, Wealth, and Women in Indian Mahayana Buddhism and has published articles in the Journal of Indian Philosophy, Journal of Religious History, Buddhist Studies Review, and the New Zealand Journal of Asian Studies.