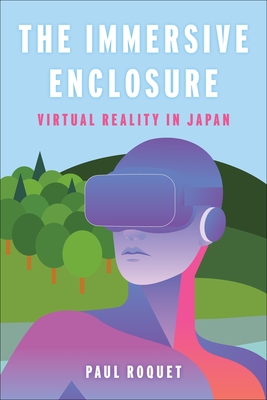 By Paul Roquet
This item is not available.

Although virtual reality promises to immerse a person in another world, its true power lies in its ability to sever a person's spatial situatedness in this one. This is especially clear in Japan, where the VR headset has been embraced as a way to block off existing social environments and reroute perception into more malleable virtual platforms. Is immersion just another name for enclosure?

In this groundbreaking analysis of virtual reality, Paul Roquet uncovers how the technology is reshaping the politics of labor, gender, home, and nation. He examines how VR in Japan diverged from American militarism and techno-utopian visions and became a tool for renegotiating personal space. Individuals turned to the VR headset to immerse themselves in three-dimensional worlds drawn from manga, video games, and genre literature. The Japanese government promised VR-operated robots would enable a new era of remote work, targeting those who could not otherwise leave home. Middle-aged men and corporate brands used VR to reimagine themselves through the virtual bodies of anime-styled teenage girls. At a time when digital platforms continue to encroach on everyday life, The Immersive Enclosure takes a critical look at these attempts to jettison existing social realities and offers a bold new approach for understanding the media environments to come.