The House That Madigan Built: The Record Run of Illinois' Velvet Hammer (Hardcover) 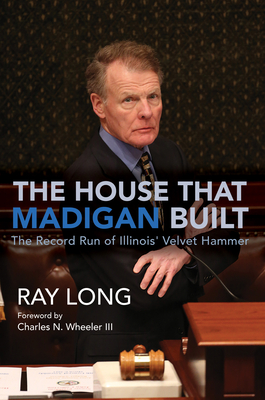 Michael Madigan rose from the Chicago machine to hold unprecedented power as Speaker of the Illinois House of Representatives. In his thirty-six years wielding the gavel, Madigan outlasted governors, passed or blocked legislation at will, and outmaneuvered virtually every attempt to limit his reach.

Veteran reporter Ray Long draws on four decades of observing state government to provide the definitive political analysis of Michael Madigan. Secretive, intimidating, shrewd, power-hungry--Madigan mesmerized his admirers and often left his opponents too beaten down to oppose him. Long vividly recreates the battles that defined the Madigan era, from stunning James Thompson with a lightning-strike tax increase, to pressing for a pension overhaul that ultimately failed in the courts, to steering the House toward the Rod Blagojevich impeachment. Long also shines a light on the machinery that kept the Speaker in power. Head of a patronage army, Madigan ruthlessly used his influence and fundraising prowess to reward loyalists and aid his daughter’s electoral fortunes. At the same time, he reshaped bills to guarantee he and his Democratic troops shared in the partisan spoils of his legislative victories. Yet Madigan’s position as the state’s seemingly invulnerable power broker could not survive scandals among his close associates and the widespread belief that his time as Speaker had finally reached its end.

Unsparing and authoritative, The House That Madigan Built is the page-turning account of one the most powerful politicians in Illinois history.

Ray Long is a Chicago Tribune investigative reporter and a two-time finalist for the Pulitzer Prize. He has covered Michael Madigan and Illinois politics for more than forty years as a journalist writing for the Chicago Tribune, Associated Press, Chicago Sun-Times, and Peoria Journal Star and The Telegraph of Alton.

"Long’s account of Madigan’s legacy is a study of the practical application of power." -- Garin Cycholl, Chicago Review of Books

"An amazingly timely book that puts into perspective the historic events of last week — the federal indictment of the most powerful figure in Illinois politics. " --Shia Kapos, Politico

“It’s safe to say that no American political figure in modern times has amassed as much power--and clung to it--for as long as Speaker Michael Madigan. Ray Long masterfully chronicles this extraordinary half-century of Illinois politics, diving deep to explain how Madigan survived and thrived in Chicago and Springfield. Like so many Illinois pols before him, the Speaker’s reign ended in humiliation, but not before the ride of a lifetime. The House that Madigan Built is a page-turning read, where Long shines a new light on a time gone by in American politics.”--Jeff Zeleny, CNN chief national affairs correspondent and former Chicago Tribune reporter

​​“From stopping time in the Illinois Legislature to keep the South Side’s White Sox in Chicago to defending his dubious tactics that won election after election, Madigan was the master of the Chicago Way. Longtime reporter Ray Long uses his front-row vantage point to bring the man to life like no one else can.”--Curtis Lawrence, former urban affairs journalist for the Chicago Sun-Times and Chicago Tribune

"As a cub reporter in the Illinois Statehouse in the 1980s, facing down the icy-eyed House Speaker was always a lesson in just how hard it can be to ‘speak truth to power.’ I wholeheartedly endorse and salute Ray Long for tackling this enigmatic, canny man's life in this engrossing chronicle of how Mike Madigan maintained his position for four decades, buffeted by the forces of money, corruption, and profound social and political change, to become the longest-serving legislative leader in U.S. history."--Nina Burleigh, national journalist and New York Times best-selling author

​​"Ray Long is the consummate investigative reporter. With this book he tells the story of one of the most powerful--and impenetrable--figures who has ever ruled over a statehouse. This will be a riveting story for anyone who followed Illinois politics during the long reign of Speaker Michael Madigan, but it will also fascinate readers who enjoy a tale about raw power."--Bruce Dold, Pulitzer Prize winner and former editor and publisher of the Chicago Tribune

"The House That Madigan Built captures how Speaker Michael Madigan, a protege of legendary Democratic Chicago Mayor Richard J. Daley, lorded over Illinois politics for decades. In this timely book, veteran journalist Ray Long brings the eye of a reporter who covered Madigan through redistricting battles, a governor’s impeachment, tax hike fights, #MeToo scandals, and a federal probe that ultimately sapped his power. Fans of raw politics will find this a must read."--Jill Wine-Banks, former Deputy Attorney General of Illinois and author of The Watergate Girl, board member of the Better Government Association, and co-host, #SistersInLaw and iGenPolitics podcasts

​"Long’s well-written and eye-opening book shows how Madigan, starting as just another patronage worker himself, carefully acquired and expanded the power for which he became famous to some and infamous to others." --Jim Dey, News-Gazette

"Long provides a greatest hits collection of Madigan's career-long quest to amass political power. . . . A comprehensive look at a style of power and politics we may never see again." --Illinois Times

"Smart, funny and even-handed, “The House That Madigan Built” is essential reading for anyone who wants to understand Illinois politics" --NewCity