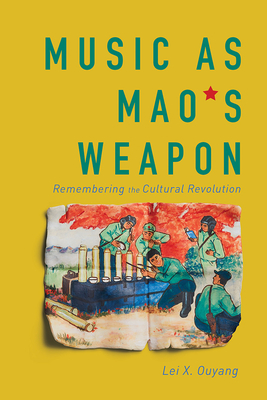 By Lei X. Ouyang
This item is not available.

China's Cultural Revolution (1966-1976) produced propaganda music that still stirs unease and, at times, evokes nostalgia. Lei X. Ouyang uses selections from revolutionary songbooks to untangle the complex interactions between memory, trauma, and generational imprinting among those who survived the period of extremes. Interviews combine with ethnographic fieldwork and surveys to explore both the Cultural Revolution's effect on those who lived through it as children and contemporary remembrance of the music created to serve the Maoist regime. As Ouyang shows, the weaponization of music served an ideological revolution but also revolutionized the senses. She examines essential questions raised by this phenomenon, including: What did the revolutionization look, sound, and feel like? What does it take for individuals and groups to engage with such music? And what is the impact of such an experience over time?

Perceptive and provocative, Music as Mao's Weapon is an insightful look at the exploitation and manipulation of the arts under authoritarianism.

Lei X. Ouyang is an associate professor of music at Swarthmore College.

"This is a significant contribution to the sparse literature on musical life during China's Cultural Revolution. The focus on individual experience and the categorization of different impacts on different generations are unusual and illuminating."--Helen Rees, author of Echoes of History: Naxi Music in Modern China