Black Rodeo: A History of the African American Western (Paperback) 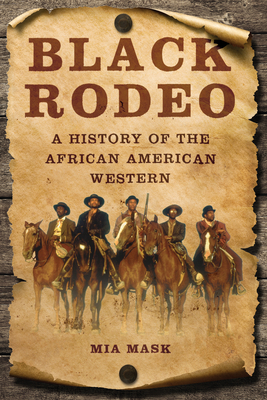 African American westerns have a rich cinematic history and visual culture. Mia Mask examines the African American western hero within the larger context of film history by considering how Black westerns evolved and approached wide-ranging goals. Woody Strode’s 1950s transformation from football star to actor was the harbinger of hard-edged western heroes later played by Jim Brown and Fred Williamson. Sidney Poitier’s Buck and the Preacher provided a narrative helmed by a groundbreaking African American director and offered unconventionally rich roles for women. Mask moves from these discussions to consider blaxploitation westerns and an analysis of Jeff Kanew’s hard-to-find 1972 documentary about an all-Black rodeo. The book addresses how these movies set the stage for modern-day westploitation films like Django Unchained.

A first-of-its kind survey, Black Rodeo illuminates the figure of the Black cowboy while examining the intersection of African American film history and the western.

Mia Mask is a professor of film at Vassar College, where she holds the Mary Riepma Ross 1932 endowed chair of film. She has appeared on CNN's The Movies, the Smithsonian Channel, the Criterion Channel, and has provided commentary on National Public Radio. Her books include Poitier Revisited: Reconsidering a Black Icon in the Obama Age and Divas on Screen: Black Women in American Film.

“Mask provides an insightful commentary on the Civil Rights era and its African-American-themed Westerns from today's perspective.”--Angela Aleiss, author of Hollywood's Native Americans: Stories of Identity and Resistance