Burdens of Proof: Cryptographic Culture and Evidence Law in the Age of Electronic Documents (Hardcover) 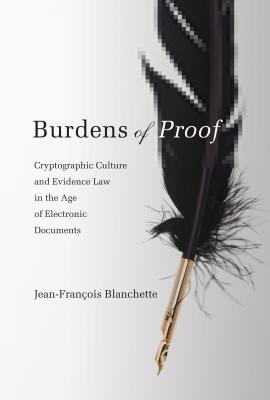 An examination of the challenges of establishing the authenticity of electronic documents--in particular the design of a cryptographic equivalent to handwritten signatures.

The gradual disappearance of paper and its familiar evidential qualities affects almost every dimension of contemporary life. From health records to ballots, almost all documents are now digitized at some point of their life cycle, easily copied, altered, and distributed. In Burdens of Proof, Jean-Fran ois Blanchette examines the challenge of defining a new evidentiary framework for electronic documents, focusing on the design of a digital equivalent to handwritten signatures.

From the blackboards of mathematicians to the halls of legislative assemblies, Blanchette traces the path of such an equivalent: digital signatures based on the mathematics of public-key cryptography. In the mid-1990s, cryptographic signatures formed the centerpiece of a worldwide wave of legal reform and of an ambitious cryptographic research agenda that sought to build privacy, anonymity, and accountability into the very infrastructure of the Internet. Yet markets for cryptographic products collapsed in the aftermath of the dot-com boom and bust along with cryptography's social projects.

Blanchette describes the trials of French bureaucracies as they wrestled with the application of electronic signatures to real estate contracts, birth certificates, and land titles, and tracks the convoluted paths through which electronic documents acquire moral authority. These paths suggest that the material world need not merely succumb to the virtual but, rather, can usefully inspire it. Indeed, Blanchette argues, in renewing their engagement with the material world, cryptographers might also find the key to broader acceptance of their design goals.

Jean-Francois Blanchette is Assistant Professor in the Department of Information Studies at the University of California, Los Angeles.