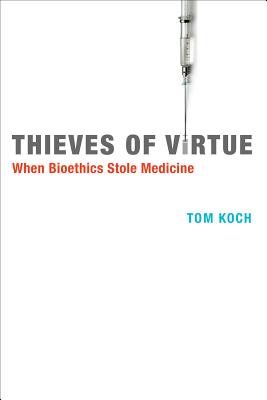 An argument against the "lifeboat ethic" of contemporary bioethics that views medicine as a commodity rather than a tradition of care and caring.

Bioethics emerged in the 1960s from a conviction that physicians and researchers needed the guidance of philosophers in handling the issues raised by technological advances in medicine. It blossomed as a response to the perceived doctor-knows-best paternalism of the traditional medical ethic and today plays a critical role in health policies and treatment decisions. Bioethics claimed to offer a set of generally applicable, universally accepted guidelines that would simplify complex situations. In Thieves of Virtue, Tom Koch contends that bioethics has failed to deliver on its promises. Instead, he argues, bioethics has promoted a view of medicine as a commodity whose delivery is predicated not on care but on economic efficiency.

At the heart of bioethics, Koch writes, is a "lifeboat ethic" that assumes "scarcity" of medical resources is a natural condition rather than the result of prior economic, political, and social choices. The idea of natural scarcity requiring ethical triage signaled a shift in ethical emphasis from patient care and the physician's responsibility for it to neoliberal accountancies and the promotion of research as the preeminent good.

The solution to the failure of bioethics is not a new set of simplistic principles. Koch points the way to a transformed medical ethics that is humanist, responsible, and defensible.

Tom Koch, an international lecturer and consultant on bioethics, gerontology, and public health, is the author of fifteen books, including Mirrored Lives: Aging Children and Elderly Parents; Cartographies of Disease: Maps, Mapping, and Medicine; Disease Maps: Epidemics on the Ground