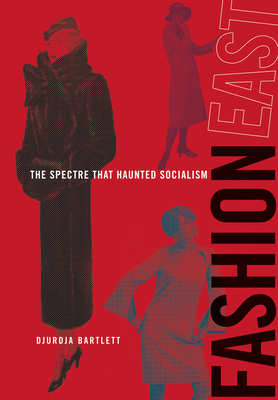 A richly illustrated, comprehensive study of fashion under socialism, from state-sponsored prototypes to unofficial imitations of Paris fashion.

The idea of fashion under socialism conjures up images of babushka headscarves and black market blue jeans. And yet, as Djurdja Bartlett shows in this groundbreaking book, the socialist East had an intimate relationship with fashion. Official antagonism—which cast fashion as frivolous and anti-revolutionary—eventually gave way to grudging acceptance and creeping consumerism. Bartlett outlines three phases in socialist fashion, and illustrates them with abundant images from magazines of the period: postrevolutionary utopian dress, official state-sanctioned socialist fashion, and samizdat-style everyday fashion. Utopian dress, ranging from the geometric abstraction of the constructivists under Bolshevism in the Soviet Union to the no-frills desexualized uniform of a factory worker in Czechoslovakia, reflected the revolutionary urge for a clean break with the past. The highly centralized socialist fashion system, part of Stalinist industrialization, offered official prototypes of high fashion that were never available in stores—mythical images of smart and luxurious dresses that symbolized the economic progress that socialist regimes dreamed of. Everyday fashion, starting in the 1950s, was an unofficial, do-it-yourself enterprise: Western fashions obtained through semiclandestine channels or sewn at home. The state tolerated the demand for Western fashion, promising the burgeoning middle class consumer goods in exchange for political loyalty. Bartlett traces the progress of socialist fashion in the Soviet Union, Czechoslovakia, Hungary, East Germany, Poland, and Yugoslavia, drawing on state-sponsored socialist women's magazines, etiquette books, socialist manuals on dress, private archives, and her own interviews with designers, fashion editors, and other key figures. Fashion, she suggests, with all its ephemerality and dynamism, was in perpetual conflict with the socialist regimes' fear of change and need for control. It was, to echo the famous first sentence from the Communist Manifesto, the spectre that haunted socialism until the end.

Djurdja Bartlett is a Research Fellow at London College of Fashion, University of the Arts London.

A groundbreaking investigation [in which] the scope of information and analysis given is impressive. At the same time it is a readable insight into a system which profoundly affected fashion as it did every aspect of life in the Eastern Bloc—a phenomenon from our immediate past and on our doorstep which continues to fascinate.—Selvedge—

…FashionEast is a beautifully presented and seriously researched attempt to uncover how fashion worked, or didn't work, in the 72 years of the Soviet Union and the 42 years of the Eastern Bloc…When Stepanova says in 1923 that 'the clothing of today must be seen in action,' we could say too that the history of clothing must also be 'in action,' and, as Bartlett reminds us, not merely as a frivolous sideline to main political events, but as an important reflection of them.

FashionEast is by far, the best source on the market concerning Communist fashion.