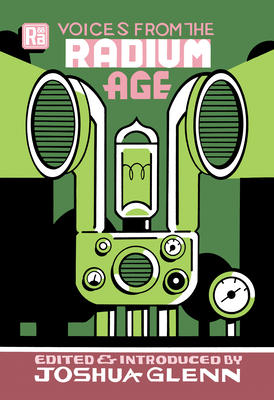 A collection of science fiction stories from the early twentieth century by authors ranging from Arthur Conan Doyle to W. E. B. Du Bois.

This collection of science fiction stories from the early twentieth century features work by the famous (Arthur Conan Doyle, creator of Sherlock Holmes), the no-longer famous (“weird fiction" pioneer William Hope Hodgson), and the should-be-more famous (Bengali feminist Rokeya Sakhawat Hossain). It offers stories by writers known for concerns other than science fiction (W. E. B. Du Bois, author of The Souls of Black Folk) and by writers known only for pulp science fiction (the prolific Neil R. Jones). These stories represent what volume and series editor Joshua Glenn has dubbed “the Radium Age”—the period when science fiction as we know it emerged as a genre. The collection shows that nascent science fiction from this era was prescient, provocative, and well written.

Readers will discover, among other delights, a feminist utopia predating Charlotte Perkins Gilman’s Herland by a decade in Hossain’s story, “Sultana’s Dream”; a world in which the human population has retreated underground, in E. M. Forster’s “The Machine Stops”; an early entry in the Afrofuturist subgenre in Du Bois’s last-man-on-Earth tale, “The Comet”; and the first appearance of Jones’s cryopreserved Professor Jameson, who despairs at Earth’s wreckage but perseveres—in a metal body—to appear in thirty-odd more stories.

Joshua Glenn, writer and semiotician, is the editor of the Radium Age series and the publisher of HiLobrow. He is the coauthor of several books, including The Idler’s Glossary and Unbored: The Essential Field Guide to Serious Fun.

"For early SF buffs, this will be a substantial delight.”—Publishers Weekly

"Even if you’re just looking for old-school adventure mixed with still trenchant social allegory this is a lineup full of winners. The rest of the series promises to be a just as big a treat and, with cover designs by Guelph artist Seth, they’re nice to look at too."—Alex Good, The Toronto Star

"These stories fizz and pop with something much better than believable possibilities. They remind us of how joyful the future once seemed."—Scott Bradfield, The LA Times