Transforming Relations: Essays on Jews and Christians Throughout History in Honor of Michael A. Signer (Helen Kellogg Institute for International Studies) (Hardcover) 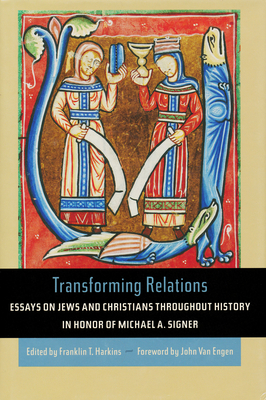 Transforming Relations is a collection of original essays on the history of Jews and Christians in antiquity, the Middle Ages, and the modern era that honors the influential work of Michael A. Signer (1945-2009). Reflecting the breadth of Signer's research and pedagogical interests, the essays treat various aspects of the Jewish-Christian relationship through the centuries, from the divine law in antiquity to philosemitism in contemporary Christianity, from scriptural interpretation in the twelfth century to Christian Hebraism in the fifteenth, and from the presentation of Christianity in the Talmud and Midrashim to modern Christian understandings of Judaism. The essays are unified in their emphases on two principles that pervade Signer's own scholarly work: that the sacred texts shared by Jews and Christians serve simultaneously as a point of convergence and divergence for the two religious communities, and that modern practitioners of Judaism and Christianity must recognize and appreciate the other as part of a living tradition.

A fitting tribute to Signer's wide-ranging work, the volume aims to complement and continue his passionate and learned work of transforming relations between Jews and Christians. It will appeal to a broad readership, including historians of Judaism and Christianity, scholars of the Middle Ages, students of the history of biblical exegesis, and systematic theologians.