A Treasury of Mahāyāna Sūtras: Selections from the Mahāratnakūta Sūtra (Paperback) 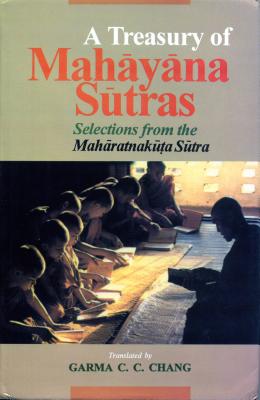 By Garma C. C. Chang (Editor)
This item is not available.

The Mahāratnakūta Sūtra is one of the five major sutra groups in the Mahāyāna canon. Of the two great schools of Buddhism, Mahāyāna has the greatest number of adherents worldwide--it prevails among the Chinese, Japanese, Koreans, Tibetans, and Vietnamese--and contains within it a number of movements, notably Zen, which have been of growing interest in the West in recent decades. Yet despite this increased attention and enormous following, translations of Mahāyāna scriptures have been scarce and fragmentary; clearly, a comprehensive translation of a major work within the canon was called for.

This volume addresses that need. It contains 22 of the 49 Sūtras of the Mahāratnakūta (or Treasury) Sūtra, many translated for the first time in a Western language, selected and arranged to give the modern reader a progressive introduction to one of the world's major religious traditions. Subjects covered include Māyā and miracles, the teachings on Consciousness, Emptiness, and monastic discipline, the Mystical Light of the Tathāgata, and the devotional practice of Pure Land, making this a comprehensive source book of Mahāyāna Buddhism hitherto unavailable in English. The book also includes an introduction to provide historical and interpretive guidance, annotations that assist in the comprehension of difficult passages, and an extensive glossary that will be valuable to specialist and layman alike. A team of scholars, working in Taiwan, spent eight years translating the Treasury's million words from Chinese, using Tibetan texts for comparison and checking each Sūtra with an international board of scholars. In the course of translating from the original, special effort was made to retain both the devotional style appropriate for religious reading and the precision required by the scholar, while presenting the material with a clarity and flow that would make it accessible to the Western layman. The editors then selected, arranged, and annotated the 22 Sūtras presented here.

Published in cooperation with The Institute for Advanced Studies of World Religions.

Garma Chen-Chi Chang is Emeritus Professor of Religious Studies at the Pennsylvania State University and a renowned Buddhist scholar. His books include The Buddhist Teaching of Totality and The Practice of Zen, as well as his English translation of the Tibetan classic, The 100,000 Songs of Milarepa.