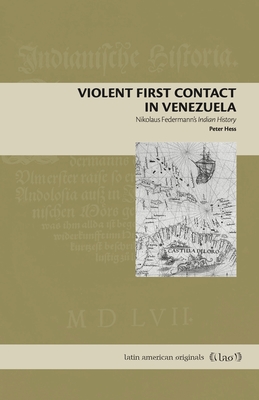 By Peter Hess
This item is not available.

Published in 1557, Nikolaus Federmann's Jndianische Historia is a fascinating narrative describing the German military commander's incursion into what is now Venezuela. Designed not only for classroom use but also for the use of scholars, this English translation is accompanied by a critical introduction that contextualizes Federmann's firsthand account within the broader Spanish colonial system.

Having gained the rights to colonize Venezuela from the Spanish Crown in 1528, the Welser merchant house of Augsburg, Germany, sent mercenaries, settlers, and miners to set up colonial structures. The venture never turned a profit, and operations ceased in 1546 after two Welser officials were murdered. Federmann's text gives an account of his foray into the interior of Venezuela in 1530-31. It describes violent first contact with Indigenous peoples as well as Federmann's communication strategies, how he managed to prevail in hostile terrain, and how he related to other agents of the conquests. It also documents his unwavering belief in the intrinsic preeminence of European Christians and, ultimately, in the righteousness of his mission.

The only detailed record of this incursion, Federmann's text adds a unique and important perspective to our understanding of first colonial contact on the Caribbean coast of South America. It provides insight into the first-contact dynamic, the techniques of subjugation and dominance, and the web of diverging interests among stakeholders. This volume will be a valuable resource for courses and for scholarship on conquest and colonialism in Latin America.

Peter Hess is Associate Professor of Germanic Studies at the University of Texas at Austin. He is the author of Resisting Pluralization and Globalization in German Culture, 1490-1540: Visions of a Nation in Decline.