Heimskringla: History of the Kings of Norway (Paperback) 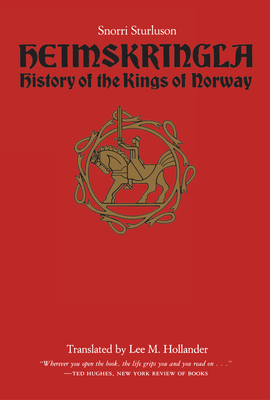 Beginning with the dim prehistory of the mythical gods and their descendants, Heimskringla recounts the history of the kings of Norway through the reign of Olaf Haraldsson, who became Norway's patron saint. Once found in most homes and schools and still regarded as a national treasure, Heimskringla influenced the thinking and literary style of Scandinavia over several centuries.

Snorri Sturluson was, without compare, the greatest historian of the Middle Ages. His translator, the late Lee M. Hollander, was a noted authority in the field of Old Norse literature.

[Snorri Sturluson] speaks—as almost no other historian ever has spoken—with the authority of a man whose masterful skills would have made him one of the formidable, foremost in any of the events he records. So he saturates even remotely past happenings with a gripping first-hand quality...Hollander's translation is very good, fresh on every page ...Wherever you open the book, the life grips you and you read on....
— Ted Hughes

Among the many contibutions to world literature that ancient Iceland has given us, Heimskringla stands out as one of the truly monumental works. Among medieval European histories in the vernacular it has no equal.
— Modern Philology