Literary Diseases: Theme and Metaphor in the Italian Novel (Paperback) 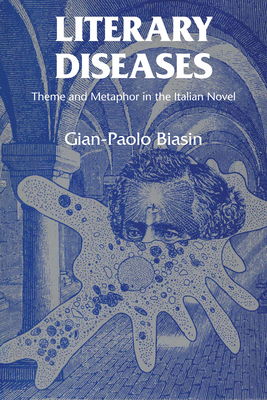 Disease—real or imagined, physical or mental—is a common theme in Western literature and is often a symbol of modern alienation. In Literary Diseases, a comprehensive analysis of the metaphorical and symbolic force of disease in modern Italian literature, Gian-Paolo Biasin expands the geography of the discussion of this important theme. Using as a backdrop the perspective of European experiences of the previous hundred years, Biasin analyzes the theme of disease as a reflection of certain sociological and historical phenomena in modern European novels, as a metaphor for the world visions of selected Italian novelists, and especially as a vehicle for understanding the nature and function of fiction itself. The core of Biasin’s study is found in his discussion of the works of four major Italian writers. In his criticism of the novels of Giovanni Verga, who stood at the center of many complex developments in the nineteenth century, he examines the antecedents of modern Italian prose. He then scrutinizes the works of Italo Svevo and Luigi Pirandello, who together inaugurated the modern novel in Italy. Of particular interest is his exploration of their critical use of psychoanalysis and madness climaxed by apocalyptic visions. He then discusses the prose of Carlo Emilio Gadda, which epitomizes the problems of the avant-garde in its experimentalism and expressionism. Biasin utilizes a broad spectrum of critical approaches—from sociology, psychoanalysis, and different trends in modern French, American, and Italian literary criticism—in shaping his own methodology, which is a thematic and structural symbolism. He concludes that disease in literature should be considered as a metaphor for writing (écriture) and as a cognitive instrument that calls into question the anthropocentric values of Western culture. The book, with its textual comparisons and unusual supporting examples, constitutes a significant methodological contribution as well as a major survey of modern Italian prose, and will allow the reader to see traditional landmarks in European fiction in a new light.

Gian-Paolo Biasin (1933–1998) was Professor of Italian at the University of California, Berkeley.