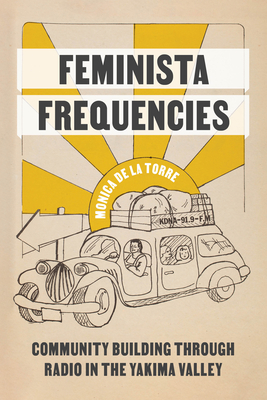 Beginning in the 1970s Chicana and Chicano organizers turned to community radio broadcasting to educate, entertain, and uplift Mexican American listeners across the United States. In rural areas, radio emerged as the most effective medium for reaching relatively isolated communities such as migrant farmworkers. And in Washington's Yakima Valley, where the media landscape was dominated by perspectives favorable to agribusiness, community radio for and about farmworkers became a life-sustaining tool.

Feminista Frequencies unearths the remarkable history of one of the United States' first full-time Spanish-language community radio stations, Radio KDNA, which began broadcasting in the Yakima Valley in 1979. Extensive interviews reveal the work of Chicana and Chicano producers, on-air announcers, station managers, technical directors, and listeners who contributed to the station's success. Monica De La Torre weaves these oral histories together with a range of visual and audio artifacts, including radio programs, program guides, and photographs to situate KDNA within the larger network of Chicano community-based broadcasting and social movement activism. Feminista Frequencies highlights the development of a public broadcasting model that centered Chicana radio producers and documents the central role of women in developing this infrastructure in the Yakima Valley. De La Torre shows how KDNA revolutionized community radio programming, adding new depth to the history of the Chicano movement, women's activism, and media histories.