Peru's Indian Peoples and the Challenge of Spanish Conquest: Huamanga to 1640 (Paperback) 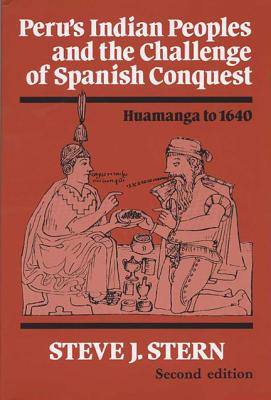 This second edition of Peru’s Indian Peoples and the Challenge of Spanish Conquest includes Stern’s 1992 reflections on the ten years of historical interpretation that have passed since the book’s original publication—setting his analysis of Huamanga in a larger perspective.

“This book is a monument to both scholarship and comprehension, comparable in its treatment of the indigenous peoples after the conquest only to that of Charles Gibson for the Aztecs, and perhaps the best volume read by this reviewer in several years.”—Frederick P. Bowser, American Historical Review

“Peru’s Indian Peoples and the Challenge of Spanish Conquest is clearly indispensable reading for Andeanists and highly recommended to ethnohistorians generally.  In technical respects it is a job done right, and conceptually it stands out as a handsome example of anthropology and history woven into one tight fabric of inquiry.”—Frank Salomon, Ethnohistory

Steve J. Stern is professor of history and director of Latin American and Iberian Studies at the University of Wisconsin–Madison.  His books include Resistance, Rebellion, and Consciousness in the Andean Peasant World, 18th to 20th Centuries and Confronting Historical Paradigms: Peasants, Labor, and the Capitalist World System in Africa and Latin America, both of which are published by the University of Wisconsin Press.

“A masterful and superbly written history of the Indians of the Ayachucho region during the first century after the conquest, Stern’s work greatly advances research into Andean society.”—Jeffrey L. Klaiber, S. J., The Americas