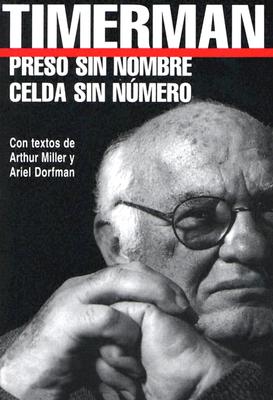 A classic of world literature back in print in a Spanish-language edition.

Wisconsin edition is for sale only in North America.

Jacobo Timerman (1923–1999) was born in the Ukraine, moved with his family to Argentina in 1928, and was deported to Israel in 1980. He returned to Argentina in 1984. Founder of two Argentine weekly newsmagazines in the 1960s and a commentator on radio and television, he was best-known as the publisher and editor of the newspaper La Opinión from 1971 until his arrest in 1977. An outspoken champion of human rights and freedom of the press, he criticized all repressive governments and organizations, regardless of their political ideologies. His other books include The Longest War: Israel in Lebanon; Cuba: A Journey; and Chile: A Death in the South.

"At two in the morning of April 15, 1977, twenty armed men in civilian clothes arrested Jacobo Timerman, editor and publisher of a leading Buenos Aires newspaper. Thus began thirty months of imprisonment, torture, and anti-Semitic abuse. . . . Unlike 15,000 other Argentines, ‘the disappeared,’ Timerman was eventually released into exile. His testimony [is] gripping in its human stories, not only of brutality but of courage and love; important because it reminds us how, in our world, the most terrible fantasies may become fact.”—New York Times, Books of the Century

“It ranks with Hannah Arendt’s Eichmann in Jerusalem in its examination of the totalitarian mind, the role of anti-Semitism, the silence.”—Eliot Fremont-Smith, Village Voice

“It is impossible to read this proud and piercing account of [Timerman’s] suffering and his battles without wanting to be counted as one of Timerman’s friends.”—Michael Walzer, New York Review of Books

“Timerman was a living reminder that real prophets are irritants and not messengers of reassurance. He told it like it is, whether in Argentina, Israel, Europe, or the United States.”—Arthur Miller

"One of the most poignant testimonies ever written by a political prisoner. . . . A classic of world literature."—Molly Ivins, Texas Observer