An Irish-Speaking Island: State, Religion, Community, and the Linguistic Landscape in Ireland, 1770–1870 (History of Ireland & the Irish Diaspora) (Paperback) 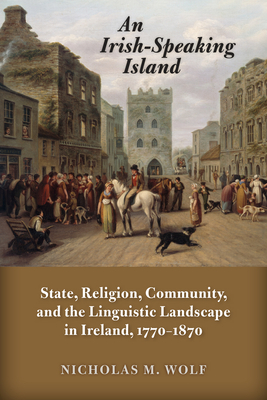 By Nicholas M. Wolf
This item is not available.

After 1770, Ireland experienced the establishment of modern forms of Irish Catholicism, new engagement by the public with the political process, and the growth of the modern state, represented by new legal and educational systems. An Irish-Speaking Island investigates the role in these developments of the population who spoke Irish in their daily lives—whether as a first or second language—and links the history of language contact and bilingualism with the broader history of Ireland in the eighteenth and nineteenth centuries.
As late as 1840, Ireland had as many as four million Irish speakers—a significant proportion of the total population—who could be found in every county of the island and in all social classes and religious persuasions. Their impact on the modern history of Ireland and the United Kingdom cannot be captured by a simple conclusion that they became anglicized. Rather, Nicholas M. Wolf explores the complex ways in which the transition from Irish to English placed a premium on adaptive bilingualism and shaped beliefs and behavior in the domestic sphere, religious life, and oral culture within the community. An Irish-Speaking Island will interest not only historians but also scholars of linguistics, folklore, politics, literature, and religion.

"This is a major and original contribution, not least for its thorough use of Irish-language archival sources."—Pádraig Ó Macháin, University College Cork


"Wolf shatters the dominant historical narrative, demonstrating that, in the century before 1870, Ireland was not an anglicized kingdom but was capable of articulating modernity in the Irish language. He offers a dynamic account of the complexity of the island, its institutional development, and the parallel evolution of language usage across all sections of society. Essential reading."—Dáire Keogh, St. Patrick's College, Dublin


“A conversation changer, a paradigm changer, a critical impetus to new lines of debate. Wolf draws intelligently and exhaustively on archival records to detail the persistence of the Irish language during an era when, according to our long-standing assumptions, the language was supposedly dying, yet—as Wolf amply substantiates—was in fact everywhere in use.”—citation, Michael J. Durkan Prize for Books on Language & Culture, American Conference for Irish Studies

“This important work should serve as a wake-up call to those who still insist on a simplistic and a historical view of the Irish language in Ireland, both past and present. An Irish-speaking Island is no less than a call to give Irish back to the Irish.”—The Irish Times


“By far the most complete and best-documented survey of Irish-speaking communities in the nineteenth century.”—Australasian Journal of Irish Studies


“Not only valuable in documenting the strength of Irish as a home and community language into the nineteenth century, but also in showing how willing the [state agencies, schools, and churches] were to facilitate the use of Irish. It will surprise many readers.”—Journal of Historical Sociolinguistics

“Wolf brings to his analysis an impressive familiarity with both official and Irish-language sources, and a sophisticated engagement with the literature on contemporary and historical language change. His arguments are both ingenious and convincing.”—English Historical Review