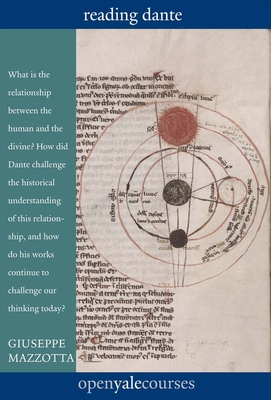 By Giuseppe Mazzotta
This item is not available.

A towering figure in world literature, Dante wrote his great epic poem Commedia in the early fourteenth century. The work gained universal acclaim and came to be known as La Divina Commedia, or The Divine Comedy. Giuseppe Mazzotta brings Dante and his masterpiece to life in this exploration of the man, his cultural milieu, and his endlessly fascinating works.   Based on Mazzotta’s highly popular Yale course, this book offers a critical reading of The Divine Comedy and selected other works by Dante. Through an analysis of Dante’s autobiographical Vita nuova, Mazzotta establishes the poetic and political circumstances of The Divine Comedy. He situates the three sections of the poem—Inferno, Purgatory, Paradise—within the intellectual and social context of the late Middle Ages, and he explores the political, philosophical, and theological topics with which Dante was particularly concerned.

Giuseppe Mazzotta is Sterling Professor of Humanities in Italian, Yale University. A specialist in medieval literature, he addresses all periods of Italian literature and culture in his extensive writings. He lives in Woodbridge, CT.