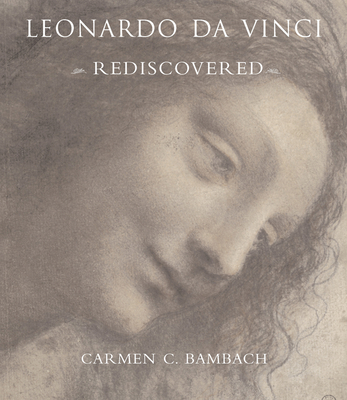 The towering genius of Leonardo da Vinci (1452–1519) has been celebrated—and remained undisputed—for hundreds of years. A groundbreaking, essential addition to scholarship, Leonardo da Vinci Rediscovered continues this legacy while simultaneously reexamining the multifaceted artist’s life and work from the ground up. This authoritative, four-volume study marks the 500th anniversary of the great master’s death with a sweeping, up-to-date portrait of Leonardo as he has never been seen before.

Internationally renowned Leonardo specialist Carmen C. Bambach unfurls new narratives, largely based on the most important, yet most misunderstood, body of evidence available: the artist’s drawings, paintings, and manuscripts. In the manner of a biographer, Bambach combs through contemporary documents and more than 4,000 surviving sheets of Leonardo’s notes and drawings to extract details about his development as an artist and thinker that have never before been suggested. Some 1,500 illustrations portray the staggering, spectacular legacy that Leonardo left behind on paper and canvas. Through Bambach’s comprehensive research, Leonardo emerges as a figure who both embodies his era and completely transcends it, enduring as one of history’s greatest artists, scientists, and inventors.

Carmen C. Bambach is curator in the Department of Drawings and Prints, The Metropolitan Museum of Art, New York. In 2019 she was awarded the Vilcek Prize for Excellence - created to honor immigrants who have had a profound impact on American society and world culture.

“A vast project spanning more than 1m words and 1,500 images . . . Bambach’s numerous discoveries include a small drapery study in the Royal Collection, where it was described as from Leonardo’s workshop.”—Dalya Alberge, Guardian

“A project nearly a quarter-century in the making, this monograph attempts to provide a comprehensive revisiting of the man so many know only as the painter of the ‘Mona Lisa’ and the ‘Last Supper.’”—Lauren Christensen, New York Times Book Review

“This outstanding work for Leonardo’s quincentenary is riveting. Across four sumptuous, scholarly volumes Bambach takes a fresh biographical approach, exploring especially through drawings and handwriting how Leonardo visualised knowledge in a new way. She humanises genius by showing the gap between his mysterious visions and staggering achievements.”—Jackie Wullschlager, Financial Times

“The outstanding memorial to Leonardo’s quincentenary year: a new biographical approach across four riveting exquisite volumes, exploring through paintings, drawings, diagrams, handwriting, Leonardo’s attempt to visualise knowledge in a fresh way, and his sense of the gap between his mysterious imaginings and his intellectual and artistic achievements” — Financial Times (Books of the Year 2019)

“On the 500th anniversary of da Vinci’s death, a four-volume exploration of his life and work is pieced together from 4,000 surviving sheets of the artist’s notes and drawings.”—Clare Swanson, Publishers Weekly

“On the 500th anniversary of da Vinci’s death, a four-volume exploration of his life and work is pieced together from 4,000 surviving sheets of the artist’s notes and drawings.”—Clare Swanson, Publishers Weekly

Winner in the PROSE Awards Art History and Criticism category, sponsored by the Association of American Publishers

Winner of the2020 PROSE Award for Excellence in Humanities, sponsored by the Association of American Publishers.

Winner of the 2020 PROSE Awards R.R. Hawkins Award, sponsored by The Association of American Publishers