The Story of Greece and Rome (Hardcover) 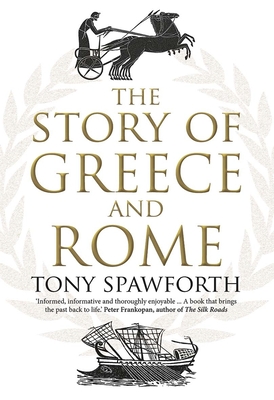 The extraordinary story of the intermingled civilizations of ancient Greece and Rome, spanning more than six millennia from the late Bronze Age to the seventh century

The magnificent civilization created by the ancient Greeks and Romans is the greatest legacy of the classical world. However, narratives about the “civilized” Greek and Roman empires resisting the barbarians at the gate are far from accurate. Tony Spawforth, an esteemed scholar, author, and media contributor, follows the thread of civilization through more than six millennia of history. His story reveals that Greek and Roman civilization, to varying degrees, was supremely and surprisingly receptive to external influences, particularly from the East.

From the rise of the Mycenaean world of the sixteenth century B.C., Spawforth traces a path through the ancient Aegean to the zenith of the Hellenic state and the rise of the Roman empire, the coming of Christianity and the consequences of the first caliphate. Deeply informed, provocative, and entirely fresh, this is the first and only accessible work that tells the extraordinary story of the classical world in its entirety.

Tony Spawforth is emeritus professor of ancient history at Newcastle University, presenter of eight archaeological documentaries in the Ancient Voices series on BBC2, and author of numerous books, including Greece and the Augustan Cultural Revolution.

“A welcome survey of the two greatest powers in the ancient Mediterranean world and their bound destinies. . . . In a time when education in the classics is ever scarcer, this is an attractive and learned introduction to a history that reverberates in present events.”—Kirkus Reviews

“[An] excellent survey. . . . In addition to straightforward historical narrative, Spawforth makes quite unexpected but relevant connections. . . . This conversational yet erudite history is a treat.”—Publishers Weekly, starred review

“From time to time, people ask me, ‘What’s a good history of Greece and Rome I can read?’ From now on, I think I’ll recommend this one, a readable tour for all readers, . . . a sweeping, beautifully written story covering eight and a half millennia. . . . With Spawforth as our guide, we grasp a world less of myths and superheroes than of people who really lived. . . . What a story, one worth reading. Spawforth makes the case for its lasting value: ‘These are things which suspend despair about the shortcomings of human nature. They bring joy, and hope.’ ”—John Timpane, Philadelphia Inquirer

"A beautifully written account of ancient history, breathtaking in its ambition and rich in insight."—Professor Paul Cartledge, author of The Spartans

“Informed, informative and thoroughly enjoyable . . . A book that brings the past back to life.”—Peter Frankopan, author of The Silk Roads


"A beautifully written account of ancient history, breathtaking in its ambition and rich in insight."—Professor Paul Cartledge, author of The Spartans
— Paul Cartledge