On the Backs of Tortoises: Darwin, the Galapagos, and the Fate of an Evolutionary Eden (Hardcover) 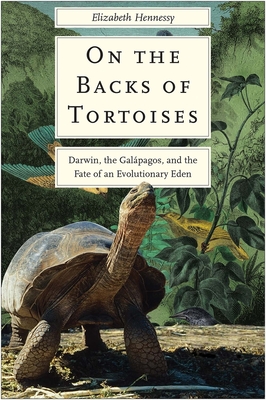 An insightful exploration of the iconic Galápagos tortoises, and how their fate is inextricably linked to our own in a rapidly changing world

The Galápagos archipelago is often viewed as a last foothold of pristine nature. For sixty years, conservationists have worked to restore this evolutionary Eden after centuries of exploitation at the hands of pirates, whalers, and island settlers. This book tells the story of the islands’ namesakes—the giant tortoises—as coveted food sources, objects of natural history, and famous icons of conservation and tourism. By doing so, it brings into stark relief the paradoxical, and impossible, goal of conserving species by trying to restore a past state of prehistoric evolution. The tortoises, Elizabeth Hennessy demonstrates, are not prehistoric, but rather microcosms whose stories show how deeply human and nonhuman life are entangled. In a world where evolution is thoroughly shaped by global history, Hennessy puts forward a vision for conservation based on reckoning with the past, rather than trying to erase it.

Elizabeth Hennessy is a geographer and assistant professor of history and environmental studies at the University of Wisconsin–Madison, where she is on the steering committee of the Center for Culture, History, and Environment.

"'Gripping . . . well-researched and thought-provoking.' She concludes that, 'whether you're well-versed in the intricacies of conservation or have only just begun to long for a look at the tortoises yourself. On the Backs of Tortoises is a natural history that asks important questions, and challenges us to think about how best to answer them.'"—Genevieve Valentine, NPR

“Timely, fresh, and compelling. . .a must-read for anyone interested in the environmental history of the Galapagos and tortoise conservation.”—Jamie Lorimer, University of Oxford, author of Wildlife in the Anthropocene: Conservation after Nature

"Hennessy’s book isn’t just about the controversial efforts to preserve the world’s most famous tortoises—it also provides an expansive tour de force of Darwinian ideas, the Galapagos, human entanglements in evolution, and the risks of icon-making."—Daniel Lewis, author of Belonging on an Island: Birds, Extinction, and Evolution in Hawai‘i

"Hennessy’s enthralling history of the iconic Galápagos Islands focuses on the tortoises after which they are named to deftly unpack the contradictions of global conservation in the name of science."—Claudia Leal, author of Landscapes of Freedom: Building a Postemancipation Society in the Rainforests of Western Colombia

“Hennessy finds that even though this archipelago is 97% a national park, humans can no longer consider themselves distinct from nature, but rather are an inseparable part of it with consequences for the identity of each.”—Deborah Cramer, author of The Narrow Edge: A Tiny Bird, an Ancient Crab, and an Epic Journey