Disorder: A History of Reform, Reaction, and Money in American Medicine (Hardcover) 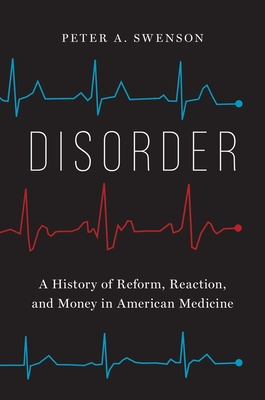 An incisive look into the problematic relationships among medicine, politics, and business in America and their effects on the nation’s health

“A comprehensive, revealing and surprising account of the history of American medicine.”—David Blumenthal, M.D., coauthor of The Heart of Power: Health and Politics in the Oval Office and president of the Commonwealth Fund

“This book is both an important contribution to the history of the American medical profession (and its impact on society as a whole), and a reminder of the malleable, historically contingent nature of its identity and ethos.”—Scott H. Podolsky, M.D., author of The Antibiotic Era

Meticulously tracing the dramatic conflicts both inside organized medicine and between the medical profession and the larger society over quality, equality, and economy in health care, Peter A. Swenson illuminates the history of American medical politics from the late nineteenth century to the present. This book chronicles the role of medical reformers in the progressive movement around the beginning of the twentieth century and the American Medical Association’s dramatic turn to conservatism later.

Addressing topics such as public health, medical education, pharmaceutical regulation, and health-care access, Swenson paints a disturbing picture of the entanglements of medicine, politics, and profit seeking that explain why the United States remains the only economically advanced democracy without universal health care. Swenson does, however, see a potentially brighter future as a vanguard of physicians push once again for progressive reforms and the adoption of inclusive, effective, and affordable practices.

Peter A. Swenson is the C. M. Saden Professor of Political Science at Yale University. He is the author of Capitalists against Markets: The Making of Labor Markets and Welfare States in the United States and Sweden.

“Disorder is a comprehensive, revealing and surprising account of the history of American medicine: its underappreciated contributions and better known failings. A must-read for students of the medical profession.”—David Blumenthal, M.D., coauthor of The Heart of Power: Health and Politics in the Oval Office and president of the Commonwealth Fund

"A necessary and worthy successor to Paul Starr's momentous Social Transformation of American Medicine. Peter Swenson vividly portrays the history of an enormous business and profession that meanders but is not lost."—George D. Lundberg, M.D., author of Severed Trust: Why American Medicine Hasn’t Been Fixed

“Peter Swenson challenges conventional wisdom about the political history of medicine in the US telling, among other things, a fascinating—and most timely—story about the dark side of American populism and how it has long disrupted public health and the common good. Disorder is deeply researched, beautifully written, thought-provoking, and highly recommended.”—James A. Morone, author of Hellfire Nation and Republic of Wrath

“This sweeping opus tells an epic tale of American medicine, with its complexities and struggles, and helps us simultaneously see its flaws and promise—while providing an impetus to guide the progress to a better era.”—Harlan M. Krumholz, M.D., author of The Expert Guide to Beating Heart Disease

“This book is both an important contribution to the history of the American medical profession (and its impact on society as a whole), and a reminder of the malleable, historically contingent nature of its identity and ethos.”—Scott H. Podolsky, M.D., author of The Antibiotic Era

“With fresh facts and never-before-heard anecdotes, Disorder provides an insightful, often-surprising and enjoyably readable history of organized medicine in America and its impact on us all.”—Michael L. Millenson, author of Demanding Medical Excellence: Doctors and Accountability in the Information Age

“This book is a definitive account of the politics and societal underpinnings of U.S. health policy during the Progressive Era. It is rich with material about the bewilderment, innovation, conflict, and reaction as the medical establishment processed the pressures for change in this time of evolving science.”—David R. Mayhew, author of Divided We Govern

“Peter Swenson’s Disorder is a triumph of scholarship and certain to be the go-to source on the political transformations of American medicine over 150 years.”—Howard Wolinsky, co-author of The Serpent on the Staff: The Unhealthy Politics of the American Medical Association

"Peter Swenson reveals the conservativism of American medicine as not a fixed reality of incentives but a tense, emergent political coalition. Disorder shows medical conservatism's political triumph rested on the successes and frailties of earlier progressivism."—Daniel Carpenter, author of Democracy by Petition