The Bhutto Dynasty: The Struggle for Power in Pakistan (Paperback) 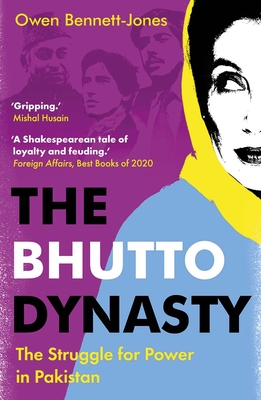 A major new investigation into the Bhutto family, examining their influence in Pakistan from the colonial era to the present day

"Students of geopolitics and South Asia will find this a valuable book."—Kirkus Reviews

The Bhutto family has long been one of the most ambitious and powerful in Pakistan. But politics has cost the Bhuttos dear. Zulfikar Ali Bhutto, widely regarded as the most talented politician in the country’s history, was removed from power in 1977 and executed two years later, at the age of 51. Of his four children, three met unnatural deaths: Shahnawaz was poisoned in 1985 at the age of 27; Murtaza was shot by the police outside his home in 1996, aged 42; and Benazir Bhutto, who led the Pakistan Peoples Party and became Prime Minister twice, was killed by a suicide bomber in Rawalpindi in 2007, aged 54.

Drawing on original research and unpublished documents gathered over twenty years, Owen Bennett-Jones explores the turbulent existence of this extraordinary family, including their volatile relationship with British colonialists, the Pakistani armed forces, and the United States.

Owen Bennett-Jones has reported for the BBC from over sixty countries. He is the author of Pakistan: Eye of the Storm. Bennett-Jones has won journalism prizes and written for the Financial Times, the Guardian, and the London Review of Books.

“In this intimate portrait of both the Bhutto family and Pakistani politics, Bennett­Jones delivers a complex Shakespearean tale of loyalty and feuding, insecurity and arrogance, and jealousy and solidarity spanning three generations.”—Foreign Affairs, Best Books of 2020

“Bennett-Jones masterfully weaves together the disparate strands of the modern, cosmopolitan, and urbane Bhutto with his strong nationalistic streak on the one hand and a socialist yearning on the other.”—Shuja Nawaz, Friday Times

“[A] magisterial and vivid account of the Bhutto dynasty.”—Andrew Whitehead, The Wire

"Students of geopolitics and South Asia will find this a valuable book."—Kirkus Reviews

“The Bhutto Dynasty is an excellent study that is far more than a chronicle of the Bhutto family, although that history is fascinating enough. Bennett-Jones’ book provides the reader with a superb case study of civil[1]military relations in the modern state. The Bhutto Dynasty is essential reading for any historian of Pakistan as well as for any scholar interested in civil-military relations in South Asia.”—Intelligence and National Security


‘A gripping and timely take on a family and a country - past, present and future.’—Mishal Husain, Broadcaster for BBC News

‘Bennett-Jones has repeatedly shown himself to be one of the most perceptive, impartial and knowledgeable journalists reporting Pakistan. Rigorous, authoritative and readable, full of both insights and investigation, this new work is an important addition to the literature of a very important, and often very misunderstood, state. ’—Jason Burke, author of Al-Qaeda

‘Blending the Bhutto family’s eventful history with that of the broader political developments, Bennett-Jones’ exploration is riveting and thought-provoking in equal measure.’—Sarah Ansari, author of Boundaries of Belonging