The Memory Bible: An Innovative Strategy for Keeping Your Brain Young (Paperback) 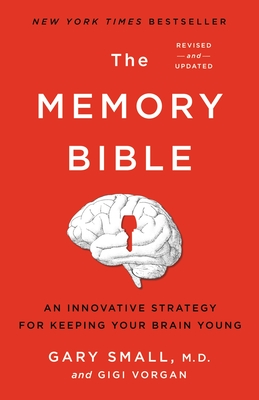 Clear, concise, prescriptive steps for improving memory loss and keeping the brain young—from one of the world's top memory experts.

Everybody forgets things sometimes—from your keys to your lunch date to the name of an acquaintance. According to Dr. Gary Small, the director of the UCLA Center on Aging, much of this forgetfulness can be eliminated easily through his innovative memory exercises and brain fitness program—now available for the first time in a book. Using Small's recent scientific discoveries, The Memory Bible can immediately improve your mental performance. One of the ten commandments that Dr. Small has pioneered to improve your memory immediately is LOOK, SNAP, CONNECT:

1: LOOK: actively observe what you want to learn
2: SNAP: create a vivid snapshot and memorable image
3: CONNECT: visualize a link to associate images

In addition, Dr. Small's comprehensive program includes a "brain diet" of memory-enhancing foods and a list of the most effective drugs, as well as a workbook with a weekly and daily calendar. Remember, as Dr. Small says, "Great memories are not born, they are made."

Gary Small, MD, is Chair of Psychiatry at Hackensack University Medical Center, and Physician in Chief for Behavioral Health Services for Hackensack Meridian Health. Previously, he was Professor of Psychiatry and Biobehavioral Sciences and Parlow-Solomon Professor on Aging at the David Geffen School of Medicine at UCLA, where he was also Director of the UCLA Longevity Center.

He has authored more than 400 scientific publications, as well as the international bestseller, The Memory Bible. Small's research has been featured in the New York Times, Wall Street Journal, London Times, Washington Post, Time Magazine, and Newsweek, and numerous television programs (e.g., NBC's Today Show, CNN, PBS). Dr. Small is the recipient of many awards and honors, including the Jack Weinberg Award from the American Psychiatric Association and the Senior Investigator Award from the American Association for Geriatric Psychiatry.

Gigi Vorgan wrote, produced and appeared in numerous feature films and television shows before teaming up with her husband, Dr. Gary Small, to co-write The Memory Bible, The Memory Prescription, The Longevity Bible, iBrain, and more.