On Paper: The Everything of Its Two-Thousand-Year History (Paperback) 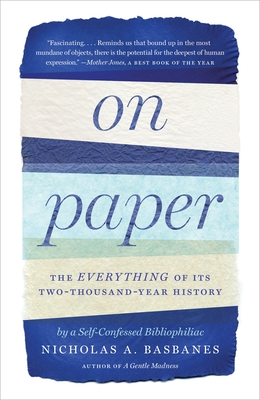 In these pages, Nicholas Basbanes—the consummate bibliophile’s bibliophile—shows how paper has been civilization’s constant companion. It preserves our history and gives record to our very finest literary, cultural, and scientific accomplishments. Since its invention in China nearly two millennia ago, the technology of paper has spread throughout the inhabited world.

With deep knowledge and care, Basbanes traces paper’s trail from the earliest handmade sheets to the modern-day mills. Paper, yoked to politics, has played a crucial role in the unfolding of landmark events, from the American Revolution to Daniel Ellsberg’s Pentagon Papers to the aftermath of 9/11. Without paper, modern hygienic practice would be unimaginable; as currency, people will do almost anything to possess it; and, as a tool of expression, it is inextricable from human culture. Lavishly researched, compellingly written, this masterful guide illuminates paper’s endless possibilities.

Nicholas A. Basbanes is an award-winning investigative journalist and was literary editor of the Worcester Sunday Telegram. His articles have appeared in The New York Times, The Washington Post, and Smithsonian, and he is a recipient of a National Endowment for the Humanities Fellowship. Basbanes lives in North Grafton, Massachusetts, with his wife.

“Fascinating. . . . Reminds us that bound up in the most mundane of objects, there is the potential for the deepest of human expression.” —Mother Jones

“I will confess to being an enormous Basbanes fan, but this volume may well be his best.” —Stephen L. Carter, Bloomberg News

“Buoyant, encyclopedic. . . . Celebrates paper in all its forms.” —The New Yorker

"A prodigious and endlessly fascinating tome. . . . In Basbanes’ capable hands, the assembled elements become amusing, fascinating, and at times profound. He is the bibliophile’s Bill Bryson and takes the reader on a journey of discovery about an object we take for granted but cannot do without." —Santa Fe New Mexican

"Clear and necessary. . . . Basbanes is a power hitter whose grand slam brings home other recent appreciators of paper." —The Chronicle of Higher Education

“Fascinating. . . . Nicholas Basbanes is an especially congenial writer, a quality he displayed memorably in A Gentle Madness. . . . He does it again most pleasurably in On Paper, a wide-ranging investigation into the ‘everything’ of that ubiquitous and indispensable construction of cellulose fibers whose history paralleled—and made possible—the rise of civilization.” —The Dallas Morning News

“As Basbanes’s book shows, paper, that most remarkable technology, has always been the most effective medium for capturing what is both practical and passionate about being human.” —The Wilson Quarterly

“[Basbanes] has poured his heart and soul into this splendid survey of a beautiful human invention.” —National Post

“An erudite, mesmerizing story about how something we consider so everyday has shaped our lives. In our age of supposedly dying print, Basbanes’s book is at once a compelling scholarly achievement and a provocative invitation to reconsider and celebrate what is truly one of the wonders of the world, that fragile yet enduring skin upon which humanity’s knowledge and vision are tattooed.” —Bradford Morrow, author of Trinity Fields

“A wonderful, fascinating and timely book on a subject some have prematurely declared obsolete. Basbanes reminds us of the vital role the invention of paper has played through the centuries in the dissemination of knowledge and ideas. His stories that run the gamut, from the way paper  is made to a poignant sheet of paper floating down to the sidewalk on September 11, 2001. Not to be missed.” —Meryle Secrest, author of Duveen

“Encyclopedic. [Basbanes] writes informatively about everything from paper trails to red tape, from the technical issues of papermaking to the high art of origami. . . . Readers will likely finish On Paper newly appreciative of not only paper’s flexibility and function but also its ubiquity. They will also likely conclude: A paperless society? Not in my children’s children’s lifetime.” —BookPage

“An absolutely fascinating tale. . . . An engrossing, essential book that no book lover should be without.” —Publishers Weekly (starred)

“A delightful and intrepid guide in this capacious history of paper. . . . A lively tale told with wit and vigor.” —Kirkus Reviews (starred)

“Every facet of this celebration of paper is engrossing and thought-provoking. . . . Paper, Basbanes avers, is nothing less than an embodiment and conveyance of humanity.” —Booklist (starred)