Wish You Were Here (Hardcover) 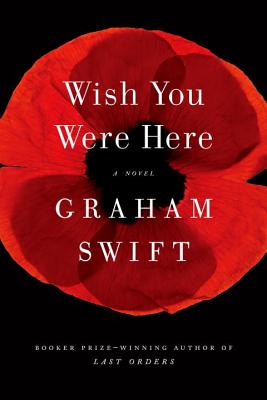 On an autumn day in 2006, on the Isle of Wight, Jack Luxton—once a Devon farmer, now the proprietor of a seaside caravan park—receives the news that his brother, Tom, not seen for years, has been killed in combat in Iraq. For Jack and his wife, Ellie, this will have unexpected, far-reaching effects. For Jack in particular it means a crucial journey: to receive his brother’s remains and to confront his most secret, troubling memories.
A hauntingly intimate, deeply compassionate story about things that touch and test our human core, Wish You Were Here also looks, inevitably, to a wider, afflicted world. Moving toward a fiercely suspenseful climax, it brilliantly transforms the stuff of headlines into heart-wrenching personal truth.

Graham Swift lives in London and is the author of eight previous novels: "The Sweet-Shop Owner; Shuttlecock, " which received the Geoffrey Faber Memorial Prize; "Waterland, " which was short-listed for the Booker Prize and won The Guardian Fiction Award, the Winifred Holtby Memorial Prize, and the Italian Premio Grinzane Cavour; "Out of This World;""Ever After, " which won the French Prix du Meilleur Livre etranger; "Last Orders, "which was awarded the Booker Prize; "The Light of Day;" and, most recently, "Tomorrow." He is also the author of "Learning to Swim, " a collection of short stories, and "Making an Elephant, "a nonfiction book. His work has been translated into more than thirty languages.

“Exquisite . . . Jamesian in sensibility and to some degree in style, [Swift] finds tragedy in the most ordinary conversation. . . . . You forget how piercing this sort of thing can be until you see Swift doing it so well, and with such patience. The depth of field in a Swift novel, thematically and emotionally, is vast. At his best, he suggests that looking intently at the smallest, most mundane thing can yield a glimpse into the meaning of life. . . . Beautifully made . . . [an] abundance of subtlety, tenderness and fluid prose.”
—Stacey D’Erasmo, The New York Times Book Review

“An extraordinary novel, the work of an artist with profound insight into human nature and the mature talent to deliver it. . . . As every truly great novelist does, in this new book, [Swift] demonstrates that perfect coordination between style and story. . . . [A] honed and driven story. Honestly, I can’t remember when I cared so passionately about how a novel might end.”
—Ron Charles, The Washington Post

“Vivid, emotionally raw . . . Swift is a writer who clearly revels in dialogue and nuance, and in Jack he has crafted a marvelously rich character whose quiet, outwardly closed-off nature belies profound internal turmoil. . . . Thoughtful and sensitive.”
—Michael Patrick Brady, The Boston Globe

“Powerful . . . This perfectly titled novel is about longing for the people in our lives who have died . . . Like Swift’s Waterland, this book explores the ways the past haunts us, and, like his Booker Prize–winning Last Orders, it uses a death as a provocation for the examination of self and country . . . Recommended for fans of Ian McEwan, Michael Ondaatje, and Kazuo Ishiguro.”
—Evelyn Beck, Library Journal

“Part ghost story, part whodunit, part tour d’horizon of a nation that seems to have lost faith in tradition and history, it is also a deeply human tale about a man driven to the edge. Praise be for a serious novel that dares to look current affairs in the face.”
—Paul Dunn, The Times (London)

“A subtly powerful novel . . . Booker Prize winner Swift is masterful in his penetrating evocation of the land Jack loves, the many languages a body can speak, and the cavernous unknown concealed beneath apparent intimacy. Brilliantly illuminating the wounded psyches of his characters, circling back to corral the secrets of the past while finding the timeless core within present conflicts, and consummately infusing this gorgeously empathic tale with breath-holding suspense, Swift tests ancient convictions about birthright, nature, love, heroism, war, death, and the covenant of grief. Readers enthralled by Julian Barnes and Ian McEwan will queue up for Swift’s virtuoso novel.”
—Donna Seaman, Booklist (starred)

“A novel as contemporary as international terrorism and the war in Iraq and as timeless as mortality, from one of Britain’s literary masters. ‘The past is past, and the dead are the dead,’ was the belief of the strong-willed Ellie, whose husband, Jack, a stolid former farmer, is the protagonist of Swift’s ninth and most powerful novel. As anyone will recognize who is familiar with his prize-winning masterworks, such a perspective on the past is in serious need of correction, which this novel provides in a subtly virtuosic and surprisingly suspenseful manner. It’s a sign of Swift’s literary alchemy that he gleans so much emotional and thematic richness from such deceptively common stock . . . Profound empathy and understated eloquence mark a novel so artfully nuanced that the last few pages send the reader back to the first few, with fresh understanding.”
—Kirkus Reviews (starred)


Reviews from the UK:

“Like its predecessors, most notably Waterland and Last Orders, Wish You Were Here is a book of quiet emotional integrity . . . The novel expertly explores the poignant contrast between irrepressible human hope and the constraints within which we live our finite lives.”
—The Times

“An extraordinary novel . . . Novelists, being on the whole brainy people, like to write about brainy people, or make their characters better with words than they would be in real life . . . But as Swift’s novels so brilliantly prove, just because someone doesn’t have a way with words doesn’t mean they can’t experience deep emotion, or be powerfully moved by the forces of history and time . . . I doubt there is a better novelist than Swift for this kind of story.”
—Evening Standard

“Like Ian McEwan’s Saturday, or Sebastian Faulks’s A Week in December, this novel draws on events from the news pages . . . But this emotionally complex novel is not mere reportage . . . It is Swift’s most intimately revelatory novel yet . . . This is a profound and powerful portrait of a nation and a man in crisis that, for all its gentle intensity, also manages to be an unputdownable read.”
—Scotland on Sunday

“Wish You Were Here is a work of wide, ambitious span . . . Recounted in pages of affecting, powerfully sober prose . . . What gives [the novel] a compelling hold is Swift’s real strength, the authenticity that hallmarks his portrayals of people in crisis.”
—The Sunday Times

“Swift is as brilliant as ever on the potency of family myth . . . This novel is often astonishingly moving.”
—Sunday Express

“I cannot tell you exactly how long after I finished this book that I sat, holding it, in stunned silence for—but it was light when I finished it and dark when I put it down. Some books can do that to you. This is one of them . . . Jack is a sort of Heathcliff type of character . . . Totally captivating . . . There’s such a beautiful tone to the writing and it’s so moving that I cannot imaging it failing to move anyone . . . Swift has already won one Man Booker prize—this deserves another nomination.”
—The Bookbag

“Swift’s best since Waterland . . . It begins to read like a thriller . . . Here Swift parcels out information like an Agatha Christie detective . . . The pace quickens and quickens. Almost against your will you find yourself racing through Swift’s brief chapters.”
—Express