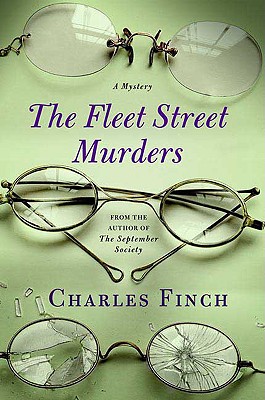 By Charles Finch
This item is not available.
Not Available

The third book in the Charles Lenox series finds the gentleman detective trying to balance a heated race for Parliament with the investigation of the mysterious simultaneous deaths of two veteran reporters.

It’s Christmas, 1866, and amateur sleuth Charles Lenox, recently engaged to his best friend, Lady Jane Grey, is happily celebrating the holiday in his Mayfair townhouse.  Across London, however, two journalists have just met with violent deaths--one shot, one throttled. Lenox soon involves himself in the strange case, which proves only more complicated as he digs deeper. However, he must leave it behind to go north to Stirrington, where he is fulfilling a lifelong dream: running for a Parliamentary seat.  Once there, he gets a further shock when Lady Jane sends him a letter whose contents might threaten their nuptials.

In London, the police apprehend two unlikely and unrelated murder suspects. From the start, Lenox has his doubts; the crimes, he is sure, are tied, but how? Racing back and forth between London and Stirrington, Lenox must negotiate the complexities of crime and politics, not to mention his imperiled engagement. As the case mounts, Lenox learns that the person behind the murders might be closer to him--and his beloved--than he knows.

Charles Finch is a graduate of Yale and Oxford. He is the author of the Charles Lenox mysteries, including "The September Society" and "A Stranger in Mayfair." His first novel, "A Beautiful Blue Death," was nominated for an Agatha Award and was named one of Library Journal's Best Books of 2007, one of only five mystery novels on the list. He lives in Oxford, England.

“Deftly plotted and richly detailed, The Fleet Street Murders is a taut Victorian thriller delivered from the pen of a master.” —Deanna Raybourn, author of SILENT ON THE MOOR

“Somewhere in detective heaven, Sherlock Holmes and Lord Peter Wimsey are already preparing a glass of hot whisky for Mr. Charles Lenox .  This suave and flinty sleuth has a gorgeously dangerous future ahead of him, and so do lovers of Victorian mysteries.  I can't wait to see where Charles Finch takes us next.”  —Louis Bayard, author of THE BLACK TOWER

“Charles Finch has mastered the art of transporting his readers back in time.  The Fleet Street Murders is intelligent, rich with detail, and full of suspense—a delightful read!” —Tasha Alexander, author of Tears of Pearl

Praise for The September Society:

“Even the most astute reader will be guessing to the end.  Another triumph.” —Library Journal (starred review)

“An intriguing glimpse of student life at Oxford during the mid-Victoria era with a sleuth to rival Sherlock Holmes, only with more foibles and warmth than the original.” —Rhys Bowen, author of Royal Flush

“Combines the sensibilities of Charles Dickens, Arthur Conan Doyle and Dorothy L. Sayers with the creative talents of its young author…. An all-around winner.” —Richmond Times-Dispatch

Praise for A Beautiful Blue Death:

“A fine specimen of the genre…. Particularly good is [Finch’s] delineation of Lenox's cozy-but-proper relationship with Lady Jane.” —Washington Post

“The best sort of historical mystery—clever, charming, full of period detail, and a delight to read.” —David Liss, author of The Devil’s Company

“What a delight this book is!” —Louise Penny, author of The Cruelest Month