This Time Tomorrow: A Novel (Hardcover) 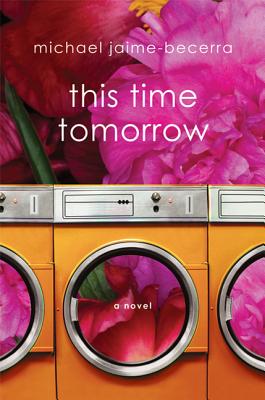 Winner of an International Latino Book Award for Best Novel!

Gilbert Gaeta, a forklift operator in a dairy, can barely make payments on the house where he lives with his thirteen-year-old daughter, Ana. When a month of overtime shifts comes his way, he begins to envision a new life, one in which he can save enough money for an engagement ring and finally propose to his girlfriend, Joyce. He works the night shift, exhausted but making good money, and it's looking like his plan will work. Then Ana is chased home from the Laundromat by bullies, and she begins pushing him to buy a washer and dryer. Gilbert tries to stay firm, but when Ana's trouble follows her to school, the pressure mounts to put her first, and delay his future with Joyce.

Joyce, who at thirty-six has never lived on her own, can't move out of her father's traditional Mexican house until she is married. Feeling her life with Gilbert slipping away, she starts to despair. And then one day, standing before her impressive collection of vintage purses, she sees a way to take control of her future. But it won't be easy.

Writing from three distinct and equally moving perspectives, award-winning author Michael Jaime-Becerra tells a story about the painful balance between love and responsibility. An intimate and poignant first novel, This Time Tomorrow casts a new light on Southern California's working class and its struggles for happiness.

Michael Jaime-Becerra grew up in El Monte, California, a working-class suburb of Los Angeles. He received his MFA from the University of California, Irvine, and currently teaches creative writing at University of California, Riverside. His short-story collection, Every Night Is Ladies’ Night, was named one of the best of the year by The Washington Post and the San Francisco Chronicle. It was awarded a California Book Award, the Silver Medal for a First Work of Fiction. Michael is a winner of an International Latino Book Award. He lives in El Monte, California.

“'This Time Tomorrow' [is] the naturalistic, deeply empathetic tale of a forklift driver, Gilbert Gaeta, and his quest to fulfill his modest vision of the American immigrant dream, with his girlfriend, Joyce, and willful 13-year-old daughter Ana in tow. Threading his lyrical prose…with the hyper-realistic particulars of daily life, Jaime-Becerra elevates his struggling East L.A. Everyman to heroic heights. If John Cheever or William Trevor had spent their early careers living and typing away in a bungalow in the San Gabriel Valley, absorbing its sensations and getting to know its residents, this might be the result.” —The Los Angeles Times

“Michael Jaime-Becerra writes about a southern California that not enough people know, and This Time Tomorrow opens a window and lets readers step through into this place he loves and details so carefully and lyrically. This is a place of hidden beauty and laughter and pain, and people who sing and lament, lovers who narrow their eyes and forge ahead, music that everyone should hear now.” —Susan Straight, author of A Million Nightingales

“Scrupulously detailed and tough-minded, This Time Tomorrow is an anti-romance about the lack of money and its effect on regular working people. The world of Michael Jaime-Becerra's debut is one in which the possibility of overtime offers hope, and filling out a deposit slip is a victory.” —Stewart O'Nan, author of Songs for the Missing

“What? No streety cholos from the 'hood, no desperate, sad illegals broken by the other side, no charming, magical poverty? Michael Jaime-Becerra instead has ordinary Angelenos living ordinary American lives. Is that crazy or what? Jaime-Becerra is carrying on a tradition of literature that cuts deep into the American psyche, one that only happens to be Mexican-American.” —Dagoberto Gilb, PEN/Hemingway Award-winning author of The Flowers