Gus & Me: The Story of My Granddad and My First Guitar (Hardcover) 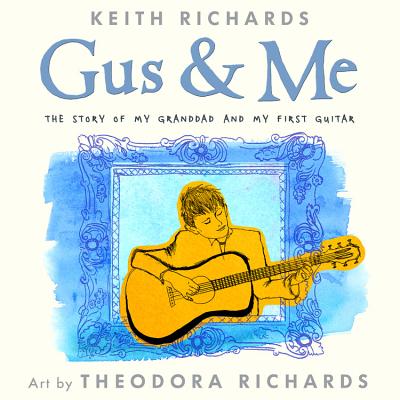 Long before there was a band, there was a boy: a young Keith Richards, who was introduced to the joy of music through his beloved granddad, Theodore Augustus Dupree, affectionately known as "Gus," who was in a jazz big band and is the namesake of Keith's daughter, Theodora Dupree Richards. Gus & Me offers a rare and intimate look into the childhood of the legendary Keith Richards through this poignant and inspiring story that is lovingly illustrated with Theodora Richards's exquisite pen-and-ink collages. This unique autobiographical picture book honors the special bond between a grandfather and grandson and celebrates the artistic talents of the Richards family through the generations. It also includes selected photographs from the Richards family collection and an exclusive audio CD featuring bonus content.

Keith Richards is a musician, singer, songwriter, and founding member of the rock band the Rolling Stones. Widely considered one of the best guitarists in the world, he has a collection of over 350 guitars. His memoir, Life, received unanimous critical acclaim and was a #1 New York Times bestseller. Mr. Richards has five children and five grandchildren.

Theodora Dupree Richards, named after her great-grandfather Theodore Augustus Dupree, is an artist and a daughter of Keith Richards and Patti Hansen. To research the images for this project, she traveled to the Richards family home in Dartford, England, and consulted family and historical photographs of her father's childhood era. This is her first book.

* "[The story] is all told so naturally and with such sweet verve that readers may not notice that this is the legendary guitarist of the Rolling Stones. The vibrant and evocative pictures are done by Richards' daughter...Over swathes of rich color she lays pen-and-ink drawings of figures and instruments, architectural details, free-floating musical notes--and cakes and tea things--that brilliantly carry the power of love and music into visual imagery. A CD of the author reading the story and playing a bit of "Malagueña" is included, and it is pretty wonderful, too. A beautiful example of artistic bookmaking, a story of family love and lore, and the magic of music personified in a way that's utterly accessible to children--and their dazzled parents."—Kirkus, starred review

* "Theodora Richards, Keith's daughter, contributes fluid, inked sketches and other freestyle graphic elements that exude love and spontaneity. The accompanying CD proves Richards is as adept at telling bedtime stories as he is performing on stage."—Publishers Weekly, starred review

"This rocks, though the effect is more like being rocked in a grandparent's arms."—Booklist