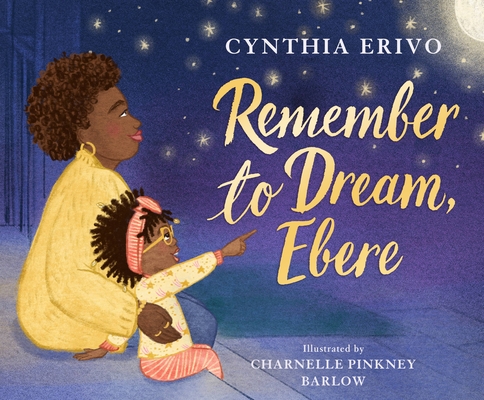 From a Tony, Emmy, and Grammy Award winner comes an inspirational and heartwarming tale of a mother and child, and the dreams they build together.

When Ebere's mother puts her to bed at night, she always says, "Remember to dream, Ebere." And dream, Ebere does! Encouraged by her mother to make her dreams as big as possible, Ebere imagines herself as the captain of a rocket ship with the ability to go anywhere in the universe.

A message of hope and possibility, award-winning star of stage and screen Cynthia Erivo's debut picture book is an ode to a child's imagination, a parent's love, and the big dreams shared by both.

Grammy, Emmy, and Tony Award-winning multi-hyphenate Cynthia Erivo is an Academy Award, Golden Globe, and SAG nominated actress, producer and singer as well as a Grammy nominated songwriter, who burst onto West End and Broadway stages in The Color Purple. This summer, Erivo released her debut album, Chapter I, Verse I, with Verve/Universal Music Group. Erivo recently starred in National Geographic’s Genius: Aretha and HBO’s The Outsider.

In 2019, Erivo brought the legacy of Harriet Tubman to the big screen in Harriet, garnering unanimous critical acclaim. Upcoming, Erivo will star in the Universal film Talent Show, produce and star in a film based on the life of Sarah Forbes Bonetta, and continue to create through her production company, Edith’s Daughter.

Charnelle Pinkney Barlow was born and raised in Poughkeepsie, New York. Growing up, she was surrounded by art daily. Her passion for illustration grew after being introduced to the wonderful world of watercolor. She received her BFA in Illustration from the University of the Arts in Philadelphia, Pennsylvania, and her MFA in Illustration as Visual Essay from the School of Visual Arts in New York City. Creating images and stories that speak to the hearts of children and those that guide them is her greatest joy. Charnelle currently lives in Indianapolis, Indiana.

"Emmy, Grammy, and Tony Award winner Erivo presents an endearing bedtime story in dialogue that will ring true for many children and their guardians.... A tender, well-paced model of an enduringly supportive parent-child relationship, and an encouraging reminder to keep building upon one’s dreams."—Publishers Weekly

"Perfect for parents and caregivers to read aloud to their children. A note from the author concludes Erivo’s debut picture book, counseling young readers to dream 'Big, Big Gargantuan dreams in the brightest colors.'  VERDICT This inspirational bedtime story, with appeal for fans of Kobi Yamada and Andrea Beaty, would be a welcome addition to every collection."—School Library Journal

"Barlow does a lovely job of capturing the sweetness of the story and Ebere’s big imagination.... Erivo’s message to dream big comes through loud and clear in this simple but tender bedtime story."—Booklist