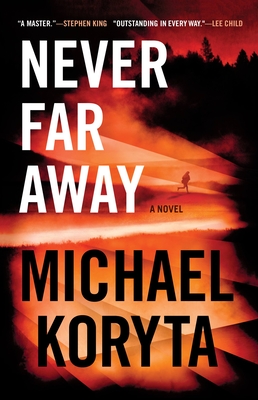 Nina Morgan’s bloodstained car was found a decade ago on a lonely Florida road. Forensic evidence suggested she’d been murdered, although her body was never found. Her disappearance left her infant children to the care of their father.

Once a pilot, mother, wife, and witness to a gruesome crime, Nina had to flee her old life to save her family. She reinvented herself as Leah Trenton, a guide in the Allagash Wilderness in northern Maine. She never expected to see her children again, but now tragedy has returned them to her—only they have no idea that she’s their mother—and delivered all of them back into danger. “Aunt Leah” will need some help, and an old ally has a suggestion: an enigmatic young hitman named Dax Blackwell.

Never Far Away is a thrilling collision between old sins and new dreams, where the wills and ingenuity of a broken family will be tested against all odds.

MICHAEL KORYTA is the New York Times bestselling author of sixteen novels—including Those Who Wish Me Dead, which is to be adapted into a film starring Angelina Jolie and directed by Taylor Sheridan. His previous novels were New York Times notable books, national bestsellers, and have been nominated for numerous awards, including having won the Los Angeles Times Book Prize. Koryta is a former private investigator and newspaper reporter. He lives in Bloomington, Indiana, and Camden, Maine.

"A new Koryta is an automatic must-read for me, but seriously - this one is special.  What a ride!  It might be the best thriller you'll read this year."
—Lee Child

“Koryta has crafted another shivery story with a killer of a start and a nail-biting ending…yet without scrimping on the heart and humanity of the characters, both good and evil.”
—Sandra Brown

“In this complex, surprising, and totally satisfying suspense novel, all of the moving parts, every character, every scene leads to one of the best showdowns I’ve read in years.”
—James Patterson

“Koryta’s expert plotting is on full display as he masterfully introduces one intriguing character after another, weaving their stories together while leading all of them—and the reader—to a stunning finale. Never Far Away is a must-read for thriller fans.”
—Alafair Burke, New York Times bestselling author of The Better Sister

"Michael Koryta is a powerful and masterful writer with bone-deep understanding of his characters, and a gift for perfectly- paced suspense. With its transporting sense of place, and elegantly layered but utterly breathless story, Never Far Away is the raw, emotional, and riveting work of a craftsman at the top of his game. By far one of the best books I’ve read this year.”
—Lisa Unger, New York Times bestselling author of Confessions on the 7:45

"Never Far Away is an emotional story about parenting, teenage rebellion and a stunning travel guide to the wilds of Maine, with enough adventure and action for thriller fans....Koryta, who has received numerous awards and nominations, again shows his polish as a writer in Never Far Away, able to sculpt enthralling stories with believable characters and solid twists. Emotion and adventure meld perfectly in Never Far Away."

“A stellar thriller…. Well-developed characters enhance the high-octane plot. Fans of nail-biting suspense will be in heaven.”
—Publishers Weekly

"Michael Koryta's Never Far Away opens with a nail-biting scene....Thrillers are only suspenseful if the stakes are high and the villains formidable, and the Blackwell men in Koryta's novels are among the most lethal in crime fiction....The story is [Leah's], though: a mother who goes through her worst nightmares only to come out as fierce as those who wish her dead."

PRAISE FOR MICHAEL KORYTA AND RISE THE DARK "Koryta delivers nonstop action in an all-too-plausible scenario, with that hint of the uncanny that's become his trademark. The ending will have readers pounding his door for more."
---Joseph Finder, New York Times bestselling author of Guilty Minds—`

"Among his many gifts, Michael Koryta is a virtuoso in his use of outdoor settings... his thrillers present the great outdoors in their most frightening aspects. The book's atmospheric power and strong cast of supporting characters make Rise the Dark compelling from the get-go."—Lloyd Sachs, Chicago Tribune

"Rise the Dark is both first-rate entertainment and an unusually interesting thriller in terms of its characters, its plot, and the ideas it explores, which include the electrical grid, Tesla's history, spiritualism, and the nation's possible vulnerability to a right-wing takeover."—The Washington Post