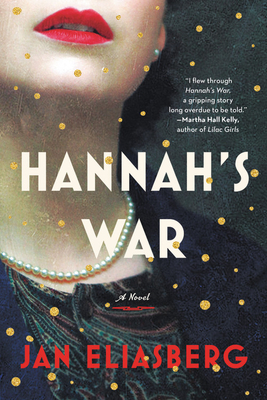 A "mesmerizing" re-imagination of the final months of World War II (Kate Quinn, author of The Alice Network), Hannah's War is an unforgettable love story about an exceptional woman and the dangerous power of her greatest discovery.
Berlin, 1938. Groundbreaking physicist Dr. Hannah Weiss is on the verge of the greatest discovery of the 20th century: splitting the atom. She understands that the energy released by her discovery can power entire cities or destroy them. Hannah believes the weapon's creation will secure an end to future wars, but as a Jewish woman living under the harsh rule of the Third Reich, her research is belittled, overlooked, and eventually stolen by her German colleagues. Faced with an impossible choice, Hannah must decide what she is willing to sacrifice in pursuit of science's greatest achievement.
New Mexico, 1945. Returning wounded and battered from the liberation of Paris, Major Jack Delaney arrives in the New Mexican desert with a mission: to catch a spy. Someone in the top-secret nuclear lab at Los Alamos has been leaking encoded equations to Hitler's scientists. Chief among Jack's suspects is the brilliant and mysterious Hannah Weiss, an exiled physicist lending her talent to J. Robert Oppenheimer's mission. All signs point to Hannah as the traitor, but over three days of interrogation that separate her lies from the truth, Jack will realize they have more in common than either one bargained for.
Hannah's War is a thrilling wartime story of loyalty, truth, and the unforeseeable fallout of a single choice.

Jan Eliasberg is an award-winning writer/director. Her prolific directing career includes dramatic pilots for CBS, NBC, and ABC, such as Miami Vice and Wiseguy; countless episodes of television series, including Bull, Nashville, Parenthood, The Magicians, Blue Bloods, NCIS: Los Angeles, Supernatural, and dozens of others; as well as the feature film Past Midnight, starring Paul Giamatti, the late Natasha Richardson, and Rutger Hauer.
Eliasberg also has a storied career as a screenwriter, writing films driven by strong female leads, including Fly Girls about the Women Air Service Pilots in WWII for Nicole Kidman and Cameron Diaz at FOX 2000, among many others.

"A deft fusion of espionage, science, military history and two wounded human hearts, Hannah's War is an amazing and distinctive novel that reimagines the forgotten woman behind one of history's most overlooked and (literally) world-shaking discoveries."—The Day

"Jan Eliasberg knows how to open big with strong suspense and wry humor and take us for a hurtling ride through one of America's most complex moments. The wonderful characters of Hannah's War bring together a moving love story, a high-stakes mystery and a fascinating look into the moral compass of an exceptional woman."—Amy Bloom, author of White Houses

"Eliasberg moves effortlessly between Hannah's past and present to deliver a historical love story full of intrigue and suspense. Hannah's War shines a much-needed light on one of the most influential women in history."—Booklist

"An exhilarating war thriller, Hannah's War moves at breakneck pace between 1930s Berlin and 1940s New Mexico. A paean to Lise Meitner, it is the compelling portrait of a woman who combined a lively scientific curiosity with an impassioned personal ethic."—Historical Novels Review

"Hannah's War is a gripping cat-and-mouse tale of love, war, deception, and espionage you won't be able to put down. Jan Eliasberg elevates the spy thriller with her clear, fierce admiration for the women of the past who refused to be edged out of the world of scientific discovery. Mesmerizing."—Kate Quinn, author of The Alice Network

"I flew through Hannah's War, a gripping true story long overdue to be told, of a brilliant woman physicist working to develop the first atomic bomb and the secret she fights to protect."—Martha Hall Kelly, author of Lilac Girls

"At the center of this novel you will find love and physics entangled together in the life of a heroic woman whose bravery and brilliance helped to change the course of modern history. Jan Eliasberg's extraordinary novel is a fictionalized version of what really happened, and despite its serious subject matter, the story moves forward with great speed and power, giving off both heat and light. This is a great story about a woman of genius."—Charles Baxter, author of The Feast of Love